A Fight for Recognition: The Lumbee Tribe in Maryland 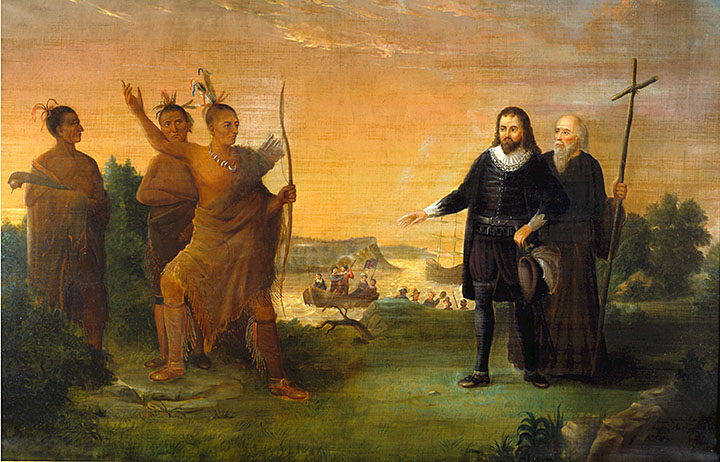 An illustration of Maryland’s first colonists meeting with one of the many Native American tribes.
“First Landing of Leonard Calvert in Maryland,” Oil on Canvas, ca. 1865-70 by David Acheson Woodward (1823 – 1909), Museum Department, 1924.7.1, MdHS.

The 2010 United States Census listed 566 American Indian tribes in the United States, none of which reside in the State of Maryland, despite the fact that our state has 20,420 Native American residents, 2,270 of whom live in Baltimore alone, according to the Office of Minority Health and Health Disparities. Why this dichotomy? Especially as many of Maryland’s Native Americans, particularly the Lumbee tribe, have fought for official recognition for centuries from the federal government.

While the Bureau of Indian Affairs (BIA) recognizes no American Indian tribes in Maryland, the state was historically home to several significant tribes beginning as far back as the tenth century.  The Shawnee Ohio Valley tribes, the Susquehannock, the Lenape, the Nanticoke, Powhatan, and Tutelo/Saponi were the first to inhabit the state. The Piscataway Indian Nation—comprised of the Piscataway Conoy Tribe, the Cedarville Band of the Piscataway, and the Piscataway Nation—also called Maryland home and was one of the most populous and powerful tribes on the Chesapeake Bay. When the first European settlers arrived in the 1600s, few Indians lived in Baltimore. They found the hunting grounds in what is now Baltimore County more to their liking. The Susquehannocks lived in the lower portions of the Susquehanna River, and the Piscataway tribe stayed south of Baltimore residing mainly on the north bank of the Potomac. Locations of Maryland’s Native American tribes.
From “The State of Maryland Historical Atlas: A review of events and forces that have influenced the development of the state,” Department of Economic and Community Development, 1973, page 9. (REFERENCE PHOTO)

The federal government and the Indian tribes have had a tumultuous relationship since the first European settlers appeared on the East Coast. These newcomers to America greeted the native people with curiosity and fear. English colonists from Virginia began to trade with these Maryland tribes, exchanging tools for beaver pelts. The tribes, especially the Piscataway, helped the colonists survive in their new land. But as the English took more land from the Indians in order to grow tobacco, the natives had to move to protect their hunting and fishing rights which the English often invaded. In 1642, the Province of Maryland declared war on the local tribes, and skirmishes broke out intermittently until the end of the 1600s. The Susquehannocks achieved an early victory against the colonial government in 1644, as Swedish colonists from New Sweden (now Wilmington, Delaware) provided the Indians with guns, which helped in their defeat of the British. However, they could not sustain war against the colonists, and in 1652, the tribe signed a peace treaty with Maryland and had to concede most of its land at the base of the Susquehanna River. The other tribes of the area met similar fates and were forced off their lands or killed by disease or in battles against the colonists.

The Lumbee tribe came to Maryland much later, originally native to North Carolina. During the early part of the 20th century, the Lumbee were part of the large southern migration to the north because of the vibrant economy there caused by the World Wars and the boom times shortly thereafter. Many came to Maryland as a temporary measure, hoping to return south as the economic situation improved there. However, many Lumbees ended up staying. As of 1993, there were about 4,300 Lumbee in Maryland, primarily living in Dundalk and 2,500 in Baltimore around PattersonPark.

A typical Lumbee home in North Carolina.
“A Croatoan Indian home, front view, with man and woman to right of door. Two young women at left,” H.19XX.325.26, Image courtesy of the North Carolina Museum of History.

The Lumbee were originally from the Danville, Virginia area. The tribe’s origins are murky, but they generally consider themselves descendants of the Cheraw Indians. Others theorize that their roots trace back to the Croatons who left Virginia in 1703 to settle in South Carolina, where the tribe quickly became embroiled in local conflicts between the colonists and the Indians. They fought with the British against the Tuscarora tribe in 1711 but joined with other tribes to fight against the colonists and traders in the Yamasee War. The tribe relocated in the 1730s when some Cheraw joined with the Catawba and moved to Robeson County, North Carolina, eventually forming the Lumbee tribe. The Cheraw tribe was a loose confederation of all of those tribes that spoke a version of the Siouan language. The Cherokee knew them as “Ani-Suwa’li” or the Suwali people. They took their name from the Lumbee River, now known as the Lumber River, which flows through their Carolina homeland.

In 1885, the North Carolina General Assembly recognized these Cheraw natives “as Indians of Robeson County by the name Croatan” and then in 1913, the General Assembly changed their name to “Cherokee Indians of Robeson County.” In 1952, the tribe voted to change their name to Lumbee and in 1956, Congress accepted that name of the tribe but did not accord them federal recognition—an important decision since it prohibited the Lumbee from participating in federal grants and other programs afforded to “recognized tribes.” The Croatan association related to the theory that the Lumbee descended from the Croatan tribe, which was known for its involvement with the lost colony of Roanoke in North Carolina.

The Indian Reorganization Act of 1934 attempted to identify which non-federally recognized tribes were truly Indian and create guidelines that would allow them to receive federal money if they achieved federal recognition. Two anthropologists were sent to Robeson County to determine the authenticity of the Robeson Indians. They used such “scientific” methods as the Pencil Test. A pencil was slipped into the subject’s hair and the subject was to vigorously shake their head. If the pencil fell out, it was determined that the subject had “real” Indian hair. Of the 209 Lumbees that were given this test, 22 passed and were categorized as Indians.

In 1956, the U.S. Congress conditionally recognized Lumbees as an Indian tribe but only within the confines of the State of North Carolina. Public Law 571, known, unofficially, as the Lumbee Act of 1956, was another doublespeak act by the federal government: “Nothing in this Act shall make such Indians (the Lumbee) eligible for any services performed by the United States for Indians because of their status as Indians, and none of the statues of the United States which affect Indians because of their status as Indians shall be applicable to the Lumbee Indians.”

This quasi-recognition by the federal government was meant to assert only that the Lumbee would be recognized as citizens of North Carolina and therefore a “state” tribe. And after nearly five decades of petitioning, the Lumbee Tribe is still not recognized by the Bureau of Indian Affairs, depriving its members of hundreds of millions of dollars in various BIA programs. The Lumbee Recognition Act was reintroduced to the House of Representatives last year and was passed to the Natural Resources Subcommittee on Indian, Insular and Alaska Native Affairs, but no action has been taken since March 2015. Adding to the Lumbees’ frustration with the recognition process, some dispute whether the Lumbee are even Native American at all. The Eastern Band of Cherokee Indians (EBCI) has long been against the Lumbee tribe receiving federal status and released this statement when the 2015 bill was proposed: From “The Croatan Indians of Sampson County, North Carolina: Their Origin and Racial Status, A Plea for Separate Schools” by George E. Butler, Durham, N.C.: The Seeman Printery, 1916.

“Some individuals in Robeson County first claimed to be ‘Indian’ in the 1880s in a successful effort to get schools separate from the children of freed slaves. The ‘Indian’ claims were followed by decades of looking to non-Indian politicians and anthropologists to provide research and a justification for a tribal identity claim. Following the non-Indian research, the Lumbee have claimed to be ‘Croatan’ (based on a Lost Colony of Roanoke theory, now disproven), ‘Siouan’ (a Native language family, not a tribe), Tuscarora, Cheraw, and Cherokee. In fact, for 40 years, the Lumbee sought to appropriate Cherokee identity and claimed to be a Cherokee tribe, over our strong objections. The State of North Carolina accepted this appropriation and formally acknowledged the Lumbee as ‘the Cherokee Indians of Robeson County’. The Lumbee repeatedly, but unsuccessfully, sought to have the federal government acknowledge them as a Cherokee tribe.”(1)

The Lumbee have long faced racial identity issues within the Native American community, as inferred by the EBCI, and without. In both North Carolina and Maryland, segregation dictated their place in the community. In some circumstances, a Lumbee was considered white, in others black, and these delineations were often assigned by uninformed outsiders. Robeson County, North Carolina in the 1950s was a unique blend of racial populations and tensions arose. In 1958, the tribe clashed with the Ku Klux Klan. James “Catfish” Cole, Grand Dragon of the KKK, harassed a Lumbee woman who was dating a white man and burned a cross on the lawn of a Lumbee family on January 13, 1958. What has been referred to as the “Battle of Hayes Pond” ensued, but not like the KKK envisioned.

The Klan held a rally on the evening of January 18th, complete with bull horn, but only one small light, so they could not see that their group of 100 was surrounded by about 1,000 Lumbee who quickly broke the light and descended on the KKK, fighting, yelling, and firing guns in the air. Catfish Cole ran away into the woods and left his wife stranded in their car. The Lumbees assisted her out of the area and the rout of the Klan galvanized the Lumbee community.

The Lumbee tribe continues its fight for recognition and equality and has found allies in Baltimore. The Baltimore American Indian Center (BAIC) at 113 South Broadway was established in 1968 to focus on the needs of the city’s Native American community. Herbert Locklear, a North Carolina Lumbee transplant, was one of the founders and served as the director for many years. The major goal was to help the local Native Americans, including Lumbees, preserve their heritage through meetings, events, annual powwows, and to educate the community at large about their diverse culture. Lumbee art is currently exhibited at the BAIC. (Sidney Levy)

Sidney Levy is a volunteer in the Maryland Historical Society’s Special Collection Department.