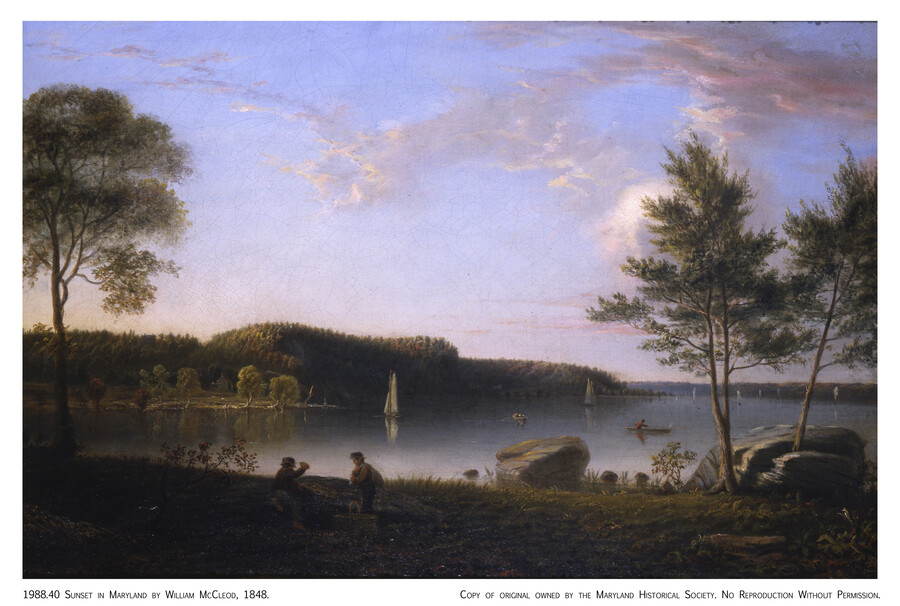 Oil on canvas landscape painting of "Sunset in Maryland", 1848, by William Douglas MacLeod. This scene features Severn River, Maryland, with a view looking towards Round Bay. In the foreground are several young boys, rocks, and some trees. On the water are sail boats and several row boats. MacLeod (1811-1892), the son of Scottish immigrants, was born in Alexandria, Virginia. After completing his education, he traveled to the University of Glasgow to study medicine, but became fascinated with art museums and painting. He returned to the United States in the 1830s, traveled along the east coast, and began painting landscapes. From around 1848-1854, MacLeod studied and exhibited his art in New York. After New York, he moved to Washington, D.C., opened his own art school and studio, and got married. He worked in his school until it was closed at the outbreak of the Civil War. MacLeod went to work as a Clerk for the Treasury Department and stayed with the government until 1873. After his departure, he became the first curator of collections at the Corcoran Gallery of Art. MacLeod is buried in Congressional Cemetery in Washington, D.C.