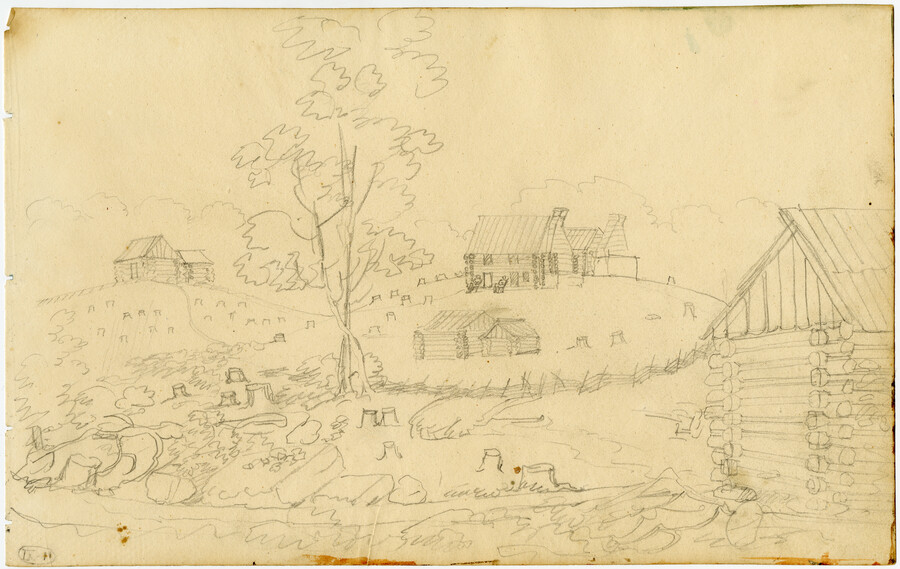 William Robertson's house near his quarry on Aquia Creek

Pencil on paper drawing of "William Robertson's house near his quarry on Aquia Creek", August 21, 1806, from the Latrobe Sketchbooks, by Benjamin Henry Latrobe. In 1804, Latrobe was in the midst of designing and sourcing materials to build the U.S. Capitol building in Washington, D.C. His supply of sandstone was running out and he sought another source. Latrobe entered into an agreement with William Robertson, the owner and operator of "Robertson's Quarry" to supply sandstone for the project. He described the quarry in his journal as “the best quarry now in work.” Latrobe went on to describe the subject matter in this sketch: "Mr. Robertson…fixed upon a beautiful little knoll in the midst of the woods close to his quarry, and determined to form a settlement there. In the true Virginia style, he first leveled [sic] every tree on the spot in a circle of about 150 yards diameter, in the center of which he built a little log house 24 feet by 18, two stories high, each divided into two small rooms. A log house kitchen, a …stable, smith shop, hen house, meat house, and tool house, [are] sprinkled irregularly over the knoll.” Latrobe knew Robertson for several years and first makes note of his quarry in an April 1798 journal entry.

William Robertson's house near his quarry on Aquia Creek