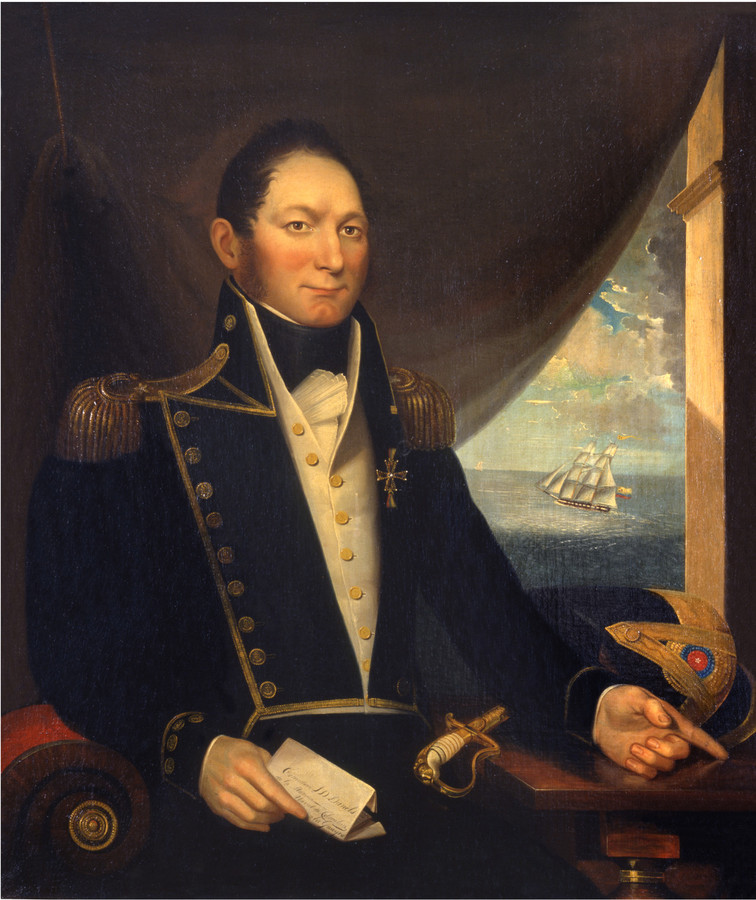 Oil on canvas portrait painting of "Commodore John Daniel Danels" (1782-1855), February 9, 1822, by Robert Street. Danels was born in Maine. He became a merchant sailor and earned his first command in 1811. Danels came to Baltimore and his voyages typically took place between Baltimore and Haiti. During the War of 1812, he was twice captured by the British and two of his ships, "Eagle" and "Rossie", were seized by the Royal Navy. Danels was held as a prisoner of war in Bermuda the first time and England the second. Like other merchant captains of the time, he turned to the lucrative business of a privateer, engaging with, and capturing, numerous British ships in 1814. After the war, Danels returned to live on Ann Street in Baltimore with his wife and children and returned to life as a merchant captain. In 1815, he had a 150 ton schooner named "Eugenia" built for his work in shipping. His return to merchant sailing did not last long. From 1818-1819, Danels returned to privateering along the South American coast. Beginning in 1820, he simultaneously joined the Colombian and Venezuelan Navies in their wars against Spain and was commissioned a Commodore. Danels was wildly successful as a privateer and took money and prizes worth hundreds of thousands of dollars. He was sued by private individuals and foreign governments numerous times. Several of the cases were sent all the way to the United States Supreme Court. In 1824, he resigned from the Colombian Navy and returned home to his wife and seven children who now lived on Albemarle Street. Danels lived in quiet retirement, passed away in 1855, and is buried in Green Mount Cemetery, Baltimore, Maryland.

Purchased with funds from the Stiles E. Tuttle Memorial Trust