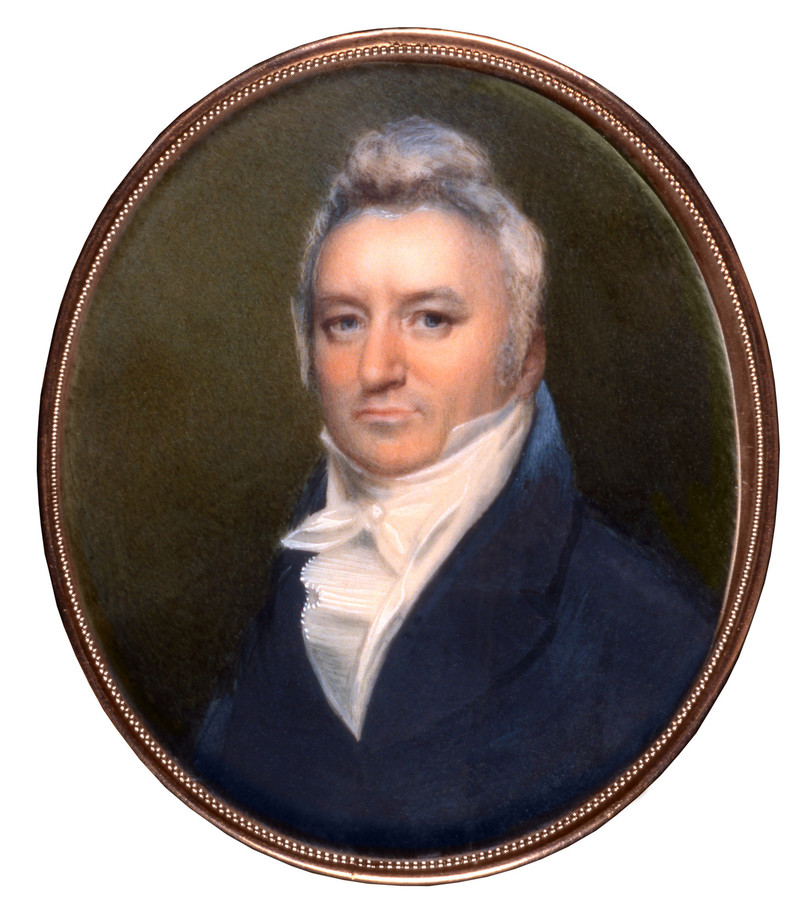 Watercolor on ivory miniature portrait painting, in gold oval frame with lock of hair on the back, of "Solomon Etting" (1764-1847), ca. 1820, by an unknown artist. Etting was born in York, Pennsylvania, entered into business in Lancaster, and moved to Baltimore, Maryland, in 1790. He was a successful merchant, dealing in shipping, banking, and hardware. Etting was later a founder and financier of the Baltimore & Ohio (B&O) Railroad (1827-1828). In 1796, he established the Water Company of Baltimore. The following year, he made his first unsuccessful petition to the Maryland General Assembly to abolish the religious test for holding political office. In 1807, he established the Baltimore East India Company and served in a number of public committees and boards, which included the Maryland Colonization Society. During the War of 1812, he helped organize a hospital for wounded soldiers and focused on assisting the quartermaster with supply requisition. Etting played a major role in the passage of the "Jew Bill" in 1826, which abolished the religious test for public office. He subsequently served one term on the Baltimore City Council (1826). Etting was married twice: first to Rachel Simon Etting (1764-1790), who he married in 1783, and Rachel Gratz Etting (1764-1834), who he married in 1791. Between the two marriages, he was the father of ten children. Etting died in 1847 and is buried in the Etting Cemetery of Baltimore, Maryland.