Life as a Fellow in the MdHS Library: Studying the Christiana Resistance

This is the first in a series of posts by Maryland Historical Society fellows which highlight their experiences researching the MdHS library and their varied and exciting historical research. The Lord Baltimore Fellowship promotes scholarship in Maryland history and culture through research in the MdHS library collections. To read more about this opportunity and how to apply, please visit the Fellowship page on our website. ‘The Christiana Tragedy’ is from “The underground railroad” by William Still. He was chairman of the Vigilance Committee and member of the Underground Railroad in Philadelphia. As fugitive slaves reached Philadelphia (and freedom!), William Still interviewed them about their experiences as slaves and their escape methods. He compiled many of these stories in this book, published in 1872.

I have been a Lord Baltimore Fellow at the Maryland Historical Society for the past year. Much of the time has been spent reading diaries filled with faded handwriting, correspondence both illegible and legible, meticulously-organized scrapbooks, and notes of previous historians. I scrolled through months of newspaper articles on microfilm – reading each ad, article and page – hoping to find little details that other historians may not have used or found significant. Some days came and went with no clues or leads, and on other days I found many sources that would help me tell a new story…

I am researching the “Christiana Riot of 1851” which occurred in the small town of the same name in Pennsylvania. Edward Gorsuch, a Baltimore County citizen, was killed by fugitive slaves refusing to return to a life in bondage.(1) This topic has been explored before. For the past forty years, historians have studied the event in terms of  race relations and racial violence in Pennsylvania. Prior to that, historians wrote about the effects of the riot in terms of its national significance or as a general study of the local history of Pennsylvania. But no one has focused on how Marylanders reacted to the Christiana Resistance, the lack of enforcement of the Fugitive Slave Law or to the murder of a Baltimore County citizen. This is what I found interesting. What did Marylanders think about it? My research focuses on the aftermath of the incident in Maryland – a slave state inhabited with the largest number of free African-Americans in the country – a very interesting dynamic.

The story began on an idyllic farm in northern Baltimore County in 1849. Four slaves – Noah Buley, Nelson Ford, and Joshua and George Hammond – escaped from Edward Gorsuch’s farm and found refuge, freedom, and work in Christiana, Pennsylvania. For two years, Gorsuch used every possible legal method to find and bring home his “property,” including petitioning Maryland Governor Philip Francis Thomas, but he was unsuccessful. When the controversial Fugitive Slave Law passed in 1850, Gorsuch had suddenly another means to recapture the fugitive slaves. He was now legally allowed by the federal government to enter a free state to recapture the men. In August 1851, William Padgett, Gorsuch’s informant, told him where the fugitives were living.

On September 11, 1851, a posse quietly approached a small stone house in Christiana. They were armed with weapons, warrants, and a U.S. Marshall. William Parker, another Maryland fugitive who rented the home, refused to let the fugitive slaves surrender.  The commotion in the early morning hours attracted neighbors – some came to offer assistance; others to prevent a possible illegal slave kidnapping.  The short and brutal fight left Edward Gorsuch dead, his son Dickinson severely wounded, and all other slaveholders running for their lives. William Parker and the fugitives from Baltimore County escaped. This incident eventually led to the largest treason trial in U.S. history (Thirty-eight people were charged with treason which ended in an acquittal or charges were dropped). No one was ever convicted of the murder of Edward Gorsuch.

Town meetings held immediately after the Resistance typically expressed outrage over the murder of a Marylander and concern about “property” and the enforcement of the Fugitive Slave Law. This meeting held in Baltimore County just a few weeks after the Resistance focused only on the issue of protecting property. The Baltimore Sun, October 4, 1851, Micro 1287, MdHS

On September 15, 6,000 people gathered in Monument Square in Baltimore to express outrage at the events in Christiana. Town meetings were also held in Baltimore County, both in Monkton and in Towsontown. The men who attended these meetings were some of the most powerful men in the state and included present and future politicians. What did they have to say? Did they differentiate their opinions between the issue of the murder and the concern over enforcement of the new federal law? My research will include the thoughts and opinions of men, women, former slaves, free African-Americans, slaveholders, and abolitionists.

Governor E. Louis Lowe, the presiding governor of Maryland from 1851 to 1854, spoke about Christiana in his Annual Message to the Maryland General Assembly on January 7, 1852. He called the trial a “farce” and a “mockery.” Frederick Douglass met William Parker (the leader of the resistance) while both men were enslaved in Maryland. Parker, along with two other resisters, left Pennsylvania and stopped at Frederick Douglass’ Rochester, New York home on the way to Canada. One of the many times he wrote about this event in depth was in his last autobiography:

“I could not look upon them as murderers. To me they were heroic defenders of the just rights of man against manstealers and murderers. So I fed them, and sheltered them in my house…I shook hands with my friends, received from Parker the revolver that fell from the hand of Gorsuch when he died, presented now as a token of gratitude and a memento of the battle for Liberty at Christiana…” The Milton Inn, or as in was known in Booth’s time, the Milton Academy. The Inn now operates as a restaurant at 14833 York Road in Sparks, Maryland. Photograph by author.

In 1849, John Wilkes Booth (yes, the man who assassinated Abraham Lincoln) was friends and classmates with Tom, Edward Gorsuch’s youngest son, at the Milton Academy in Baltimore County.(2) Although most of Booth’s correspondence was destroyed after Lincoln’s assassination, some surviving papers were published for the first time in 1997. Among them was a rough draft of a speech written in December 1860. He wrote,

“…Gentlemen, when I was a schoolboy, my bossom friend was a boy 3 years my senior  named Gorruge [Thomas Gorsuch], he was as noble a youth as any living. He had two brothers grown to be men. And and an old father who loved and was beloved by them. He was all that a man of honour should be. Two of his negros committed a robbery, they were informed upon. They nearly beat the informer to death. they ran away from Maryland, came to this state [Pennsylvania]. The father, the two sons, and the boy my playmate, came to this state under the protection of the fugitive slave law (not only to recover their property, but to arrest the thieves who belonged to them).“ Pages from Rebecca Gorsuch Mitchell’s scrapbook from the time of the 60th anniversary. Collections of LancasterHistory.org

In 1911, the citizens of Lancaster County wanted to commemorate the 60th anniversary of the event in the spirit of reconciliation. Family and friends of those who participated on both sides of the event were invited, as well as political and community leaders. W. U. Hensel, a local attorney and historian, coordinated the event and kept a scrapbook of correspondence and newspaper articles. I found some very interesting letters including many from Dickinson Gorsuch’s daughter, Rebecca (Edward’s granddaughter). In many of her letters she expressed gratitude and pleasure for the commemoration of the event.

“…I cannot express to you all this visit meant to me, the hospitality + goodwill extended by from (cross out from) all whom we met…Mr. Hensel, you gave such pleasure as will never be forgotten. (plus sign) then to crown all that beautiful medal that will be one of my cherished possessions…”

I found it difficult to understand her gratitude at the commemoration of an event that killed her grandfather and almost killed her father. I thought perhaps it was a sign of southern hospitality, but it appears to be genuine as Rebecca Gorsuch Mitchell had a lot of correspondence with Hensel in the same glowing terms – offering family diaries and letters for his research and invitations to visit her.

John Crowther, who knew the Gorsuch family, expressed disgust at the thought of commemoration festivities.

“…I know if they were living it would be very distasteful to them to have the memory of that disgraceful occurrence perpetuated. They were all staunch Union men, and law-abiding citizens, none in the county stood higher…”

These are just a few comments made by Marylanders regarding the Christiana Resistance and/or the murder of Edward Gorsuch. My research continues, not only at MdHS, but also the Maryland State Archives, the National Archives, the Historical Society of Pennsylvania, the Library of Congress and other institutions. 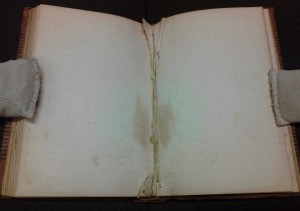 The diary entries end on August 17, 1851, the day before the posse left Baltimore County for Pennnsylvania. After that a number of pages are ripped out and the rest of the book is blank. The diary, Dickinson Gorsuch’s travel diary,  is written in a very different style compared to the other ones in the Gorsuch-Mitchell Collection of Papers at MdHS (MS 2733).  MdHS has many of his diaries, but not from the critical years of 1851 and 1852. Moores Memorial Library in Christiana holds photocopies of Dickinson Gorsuch’s 1851 diary which is in a different format, but same handwriting and style. The Library does not know the provenance of these photocopies. I do not doubt that these are his – MdHS has fifteen diaries of his in the Gorsuch Mitchell Collection – it’s the same handwriting and style. The MML copies are very much like the MdHS ones – farm account books with daily entries noting the day-to-day business of running a farm with added personal notes. Where is the original? Rebecca Gorsuch Mitchell, Dickinson’s daughter and Edward’s granddaughter, mentions the diaries to W. U. Hensel in their correspondence about the 60th anniversary. She gave them to him fo research, but did he return them? They are not in his collection.

Finally, I am extremely grateful to the Library staff – Damon, Lara, Eben, and Dr. Pat Anderson for their support as well as the opportunity to research as a Lord Baltimore Fellow. (Debbie Harner)

Still, William. The underground railroad : a record of facts, authentic narratives, letters, & c., narrating the hardships, hair-breadth escapes, and death struggles of the slaves in their efforts for freedom /  as related by themselves and others…. (Philadelphia: Porter & Coates, 1872) Maryland Historical Society

http://www.internetarchive.org The Life and Times of Frederick Douglass Written by Himself, 1892, p. 350