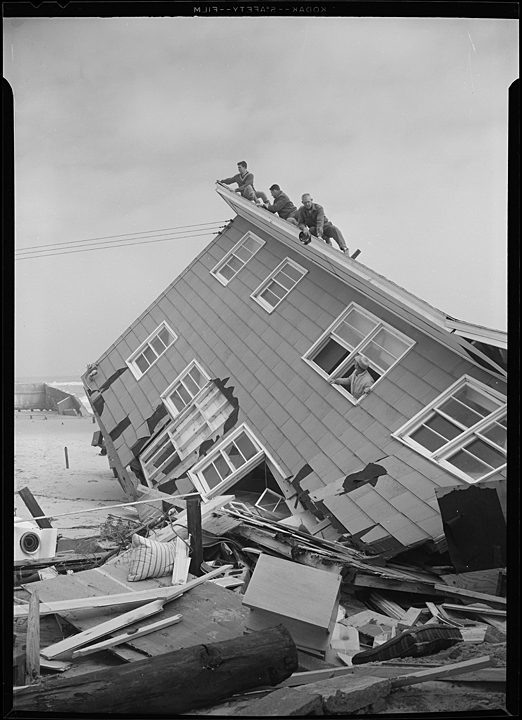 “This is the worst disaster in the history of Maryland in my time,” declared Maryland Governor Millard Tawes in March of 1962 as he surveyed the remnants of Ocean City by helicopter following one of the most destructive storms to ever hit the eastern seaboard of the United States. The nor’easter that bombarded the Atlantic coast for five days beginning on March 5 – known variously as the Great Atlantic Storm of 1962, the Storm of the Century, the Five High Storm, the Great March Storm of 1962, and the Ash Wednesday Storm of 1962 – devastated beaches and communities from North Carolina to New York, and caused damage as far north as Maine.

The unexpected and unusually powerful storm was caused by the confluence of two intense pressure systems off the coast and a “spring tide,” which resulted in  record high tides, heavy rains, hurricane force winds, tidal surges, and massive flooding. On Long Beach Island, New Jersey more than 80 percent of the structures were damaged or entirely destroyed. Waves over 40 feet in height were recorded at Rehoboth Beach, Delaware and off New York City. The U.S. destroyer Monssen, which was being towed along the New Jersey coast, was run aground. Over the course of five days, the storm claimed more than 30 lives, left more than 1200 others injured, caused hundreds of millions of dollars in damages, and left countless homeless.

For the some 1500 residents of Ocean City, the storm was a nightmare. On the evening of March 5, residents were taking shelter from what they thought was a typical nor’easter, which generally move through an area fairly quickly. But this storm proved unique – it remained parked off the coast for some 36 hours.  By the end of Tuesday, the winds had picked up and the protective dunes had been washed away by the first of what would be five high tides over the duration of the storm. At the storm’s peak on March 7 – Ash Wednesday –  the high tides were nearly nine and a half feet above average low tide. (In comparison, the highest tides of the powerful hurricane that hit Ocean City in 1933 were just over seven feet.)

Along with the high tides came a continuous hard rain, 60 mile an hour winds, and 25 foot waves – Ocean City was soon torn apart. Cars were buried in up to five feet of sand. Houses were ripped away from their foundations and into the sea. Up to eight feet of sand was washed from the beaches in some areas. More than 350 businesses and residences were damaged, with 50 establishments completely leveled. Assateague Island, the slender 37 mile barrier island that stretches from the southern tip of Ocean City into Virginia, along with Chincoteague Island in Virgina, were completely submerged by the storm surges.

On March 7, the first of the National Guard units arrived on the scene to help with the rescue and cleanup operations and also to prevent the possibility of looting. They set up headquarters in the Ocean City Elementary School. The townspeople also rallied to help their neighbors reach safety. An ad hoc network of CB radio hobbyists helped coordinate rescue efforts, communicating with rescue volunteers and sending out messages to trapped residents directing them to hang white sheets from their windows as signals. Most of the residents were evacuated by Wednesday evening. Many of those whose houses were not entirely swept away returned home to find their furniture gone and their living rooms and kitchens completely submerged.

Despite the utter destruction, the town made a quick recovery through the determination and hardwork of residents, volunteers workers, and state and federal agencies. On Memorial Day, less than three months after the disaster, Ocean City was open for business.

The repercussions of the ’62 storm are still evident today. Like the 1933 hurricane, which refashioned Ocean City into a major Atlantic fishing port, the storm that hit in 1962 had far reaching consequences, ushering in a period of rapid expansion that turned the town into the vacation destination that today sees more than 8 million annual visitors. It also simultaneously led to an increased public awareness about the environment. Prior to the storm, plans had been in place to build a private resort community on Assateague Island. In the 1950s, a group of investors from Baltimore and Washington, DC purchased a 15 mile stretch of the island with designs for a resort community to be called “Ocean Beach.” By the early 1960s, 5850 lots had been sold, although only 30 buildings were ever actually built, along with one paved road dubbed “Baltimore Boulevard.” The storm washed out most of the road and wiped out nearly all of the houses, and along with them, any further plans for development. In 1965, after three years of Congressional deliberations and renewed pressure by private developers to acquire the land, the U.S. Congress passed an act establishing the Maryland section of the island as the Assateague Island National Seashore.

On a lighter note, without the storm, a sequel to one of Maryland’s most celebrated children’s books may not have been written. In 1947, Wisconsin born author Marguerite Henry penned her Newbery Honored book, Misty of Chincoteague. The book relates the semi-fictional tale of Misty, a wild horse raised on Chincoteague Island by a local family, the Beebes. During the storm of 1962, the real Misty was forced to wait out the storm in the family’s kitchen after her barn was flooded. A few days after the storm, the horse gave birth to a foal, which the Beebes named Stormy. The following year, Marguerite Henry wrote  Stormy, Misty’s Foal, the third in a series of books about the wild horses of Assateague. (Damon Talbot)

Click on the slideshow below to see more photographs of the aftermath of the storm taken by A. Aubrey Bodine.

Corddry, Mary, City on the Sand: Ocean City, Maryland, and the People Who Built It (Tidewater Publishers: Centreville, Md, 1991)

History of Misty of Chincoteague