“Only the Instrument of the Law”: Baltimore’s Whipping Post 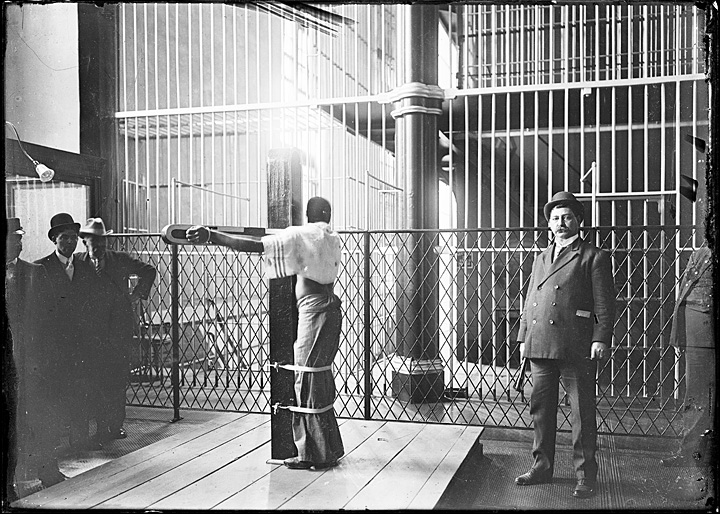 The whipping post pictured above was put into use around 1885 at the Baltimore City Jail, where until 1938, many of those convicted of wife-beating were punished.
Prisoner and officials at whipping post, all unidentified, not dated, McFee Photograph Collection, PP32.45, MdHS.

(This post was made on October 3, 2013 to the Maryland Center for History and Culture’s “underbelly” library blog.)

On a cold March day, three blue-clad guards strapped Baltimore printer Clyde Miller to a cross-shaped wooden post in the Baltimore City Jail, arms outstretched and naked to the waist. As 50 witnesses looked on, Miller was brutally flogged 20 times with a cat o’ nine tails—a whip with multiple knotted thongs—at a rate of a lash per second. After the final blow, Miller, sobbing, whimpering and “half fainting from the pain,” was taken to the prison infirmary. Sheriff Joe Deegan, the man tasked with carrying out the sentence, remarked afterwards that although he hadn’t relished the task, he was “only the instrument of the law…[and] as long as that law is on the book, I have to abide by it.”(1) Incredibly, this didn’t occur in 18th or 19th century Maryland—it took place in Baltimore in 1938.

When Clyde Miller was manacled to the smooth, dark  surface of the wooden post, he became the last person flogged on Baltimore’s archaic mechanism of punishment, under an obscure 56-year-old law that prescribed flogging for one crime only–wife-beating.

Whipping as an instrument of the law has a long history in the United States. When English settlers arrived in the New World they not only brought with them their religious, social, and political customs, but their varied forms of criminal punishment as well. In his 1881 History of Baltimore City and County, historian Thomas Scharf wrote that in Maryland’s early days, the whipping post, along with the pillory, were used as a “sort of preliminary punishment” to more harsh means that included,

”banishment, boring through the tongue with a red-hot iron, slitting the nose, cutting off one or both ears, branding with a red-hot iron, in the hand or on the forehead, with the initial letter of the offense for which the sufferer was punished, – ‘S.L.’ for seditious libeler, on either cheek, ‘M’ for manslaughter, or ‘T.’ for thief, on the left hand, ‘R’ for rogue, on the shoulder, and ‘P.’ for perjury on the forehead, [and] ‘flogging at the cart’s tail,’ when the criminal was tied to the end of a cart and flogged on his naked back while the cart was driven slowly through the town.”(2)

By the time Scharf wrote his History, official whipping by the state or local authorities as a means of criminal punishment was a long dead relic. An Annapolis postmaster accused of “tampering with the mails” became the last to be flogged under the old law around 1808. Under the direction of Supreme Court Justice Samuel Chase, the wayward official was “tied to one of the pillars in the portico of the State-House and whipped, while Judge Chase was holding court in the Senate chamber.”(3) Of course, the whipping clause that was abolished only applied to freemen. Maryland’s large slave population continued to live under fear of the lash for another half century.

In 1882, the Maryland Legislature, after much debate, revived the practice of whipping, but limited its scope to the crime of wife-beating. The law stated that “Any person who shall brutally assault and beat his wife shall be guilty of a misdemeanor, and upon presentment and conviction thereof by any court of competent jurisdiction, shall be sentenced to be whipped, not exceeding 40 lashes, or be imprisoned for a term not exceeding one year, or both, in the discretion of the court…”(4) 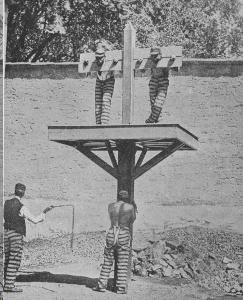 An apparatus similar to this – with pillory on top and whipping post below – used from the colonial period until the early 1800s, resided in Baltimore’s first courthouse on Calvert Street between Lexington and Fayette Street, where today the Battle Monument stands.
New County Castle, Delaware, whipping post and pillory, not dated—not part of MdHS’s collection.(10)

The Legislature felt compelled to pass the law based on “the frequent arrest of men for wife beating, and the difficulty of securing a conviction from, the suffering and privation which the imprisonment of the husband entailed upon those dependent on him.”(5) The debate and public outcry over the law was intense.  Supporters cited it as a deterrent, citing questionable statistics that indicated that flogging, or even the threat of the lash, was enough to convince many a husband to refrain from violence against his spouse. Within a few decades, advocates of the law seemed to have gained the upper hand over its critics. An 1899 news article reported that it “may be that the humane people who started the crusade against the whipping post as a mode of punishment have given up in despair, or it may be that they have only suspended their crusade…. Certain it is that the anti-whipping post crusaders are little heard of nowadays, while the contrary minded folks who were stirred by the crusade to give their testimony in support of the whipping post are not yet through talking.”(6)

By the turn of the nineteenth century, Maryland was the only state that retained a flogging law. But within a year it was joined by Delaware, and in 1905, Oregon, which enacted a similar provision to Maryland, only to repeal it six years later after considerable public uproar. Representative John Buchanon, one of the leading figures behind the repeal, summed up public opinion of the law, calling it “a relic of slavery days retained only by Maryland and Delaware” and an “inefficient, inhumane, ineffective, and anachronistic embarrassment.”(7)

In Maryland the law was enforced only rarely and the degree of severity appears to have been largely determined by the presiding judge. During Eugene O’Dunne’s tenure as judge of the Supreme Bench of Baltimore City from 1926 to 1945, he ordered that flogging sentences be carried out “without brutality.” When John Kowalski was whipped at the city jail for beating his ill wife in 1931, the sentence was carried out so gently, the burly blacksmith’s only reaction to the blows was a “half-grin.” Onlookers referred to the ten blows he received as “mere love taps.”(8) Judge J.A. Taylor, who ordered Clyde Miller’s whipping, evidently felt no such compunctions—Warden Charles P. Price, who had been at the jail for 13 years, called the whipping of Miller the “the stiffest flogging I have ever seen.”(9) 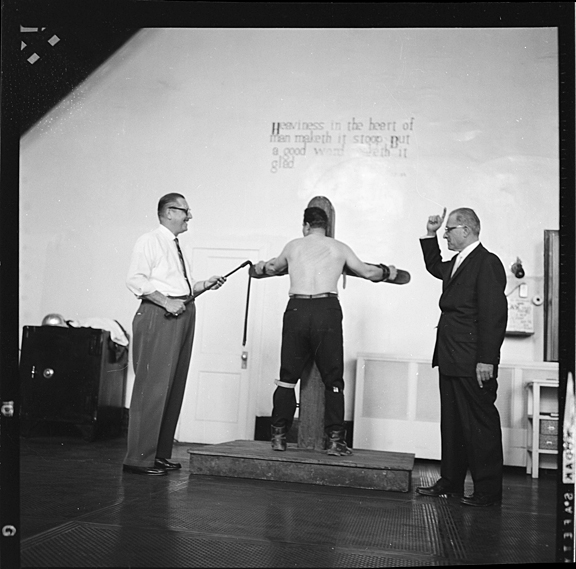 An apparent demonstration in May of 1963 of the by then banned whipping law. (lash marks are evident on the back of the “criminal”) The post was brought up from storage where it had sat for the previous 25 years at the Baltimore City Jail. Within months of this photograph being taken, the whipping post was donated to the Maryland Historical Society, where it remains today.
Whipping post, Baltimore City Jail, May 1963, Robert Kniesche, PP79.422.2, MdHS.

Delaware on the other hand, saw fit to exercise the law to its limit. One historian  estimates that over 1,600 men may have been flogged in the state between 1900 and 1940. Sixteen men were subjected to the punishment on a single day in May of 1904 on Delaware’s whipping post, nicknamed “Red Hanna.” These high numbers were probably due to the fact that Delaware had not one, but 24 offenses to which a guilty party could be punished by flogging. These included such crimes as: embezzlement by a cashier, servant or clerk; perjury or subornation of perjury; willfully and feloniously showing false lights to cause a vessel to be wrecked; burglary with explosives, in a building in which there is a human being, in the nighttime; burglary with explosives, in a building in which there is no human being, in the nighttime; and finally, bringing a stolen horse, ass, or mule into the state and selling or attempting to sell it.(11) The law remained in force in Delaware until 1972, with the last flogging occurring in 1952.

Although Maryland’s last official whipping—which took place in Anne Arundel County—occurred in 1948, the law remained on the books until 1953. Just a year prior to the repeal of the law a Frederick County man found guilty of beating his wife, escaped penalty when Governor Theodore McKeldin commuted his sentence. As late as 1964 though, advocates of punishment by the lash were calling for the law’s reinstatement —the State’s Attorney of Carroll County called for bringing back the flogging law for fathers who refused to pay child support.

Within a few years of the flogging of Clyde Miller in 1938, Baltimore’s whipping post was placed in storage at the City Jail. It sat gathering dust until discovered by construction workers during renovations of the 100-year old building in the early 1960s. In 1963, the City Jail Board donated the post to the Maryland Historical Society, where 29 years later it had a brief second act as part of a landmark museum exhibit. (Damon Talbot)

(The second part of the story of the whipping post can be read here.)

(2) Scharf, John Thomas, History of Baltimore City and County from the Earliest Period to the Present Day (Baltimore: 1881), p. 727.

(5) The Maryland Law Review, (Baltimore: The Faculty of the Baltimore Law School, November 1902)

The Maryland Law Review, (Baltimore: The Faculty of the Baltimore Law School, November 1902)

Scharf, John Thomas, History of Baltimore City and County from the Earliest Period to the Present Day (Baltimore: 1881).

“16 Flogged in Delaware: New Castle County Workhouse has a Record-Breaking Day,” The Baltimore Sun, May 22, 1904.