As you may know, in addition to being Earth Awareness Month and Financial Literacy Month, April is also National Poetry Month. Though financial literacy certainly is enticing, we figured underbelly could do a much better job promoting the latter, so we are highlighting a lesser known poem by one of Baltimore’s most famous residents. 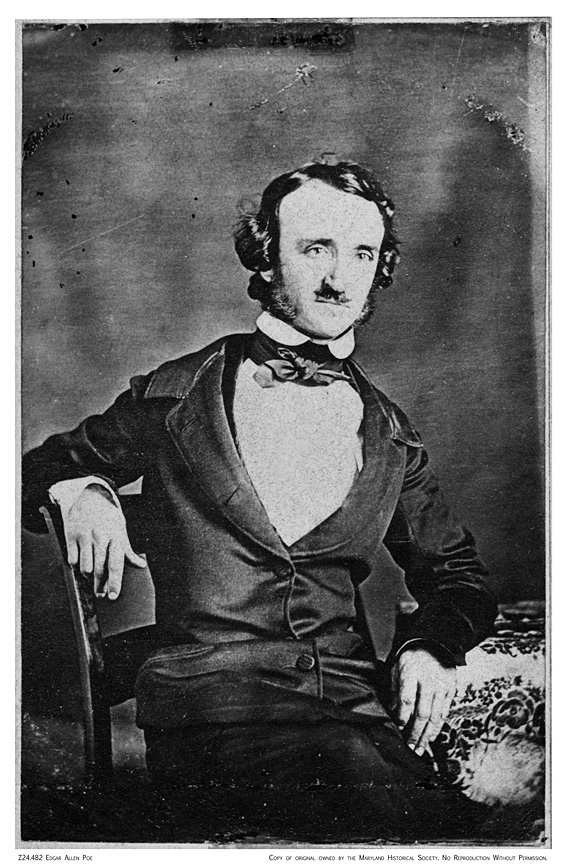 Though we don’t have a great deal of Edgar Allan Poe materials in our library, we do have a poem entitled “Original,” which was handwritten into a volume of poetry owned by a Baltimorean named Lucy Holmes.  The poem was not published in Poe’s lifetime, but finally appeared under the title “Alone” in an 1875 issue of Scribner’s Monthly.  Though the poem was penned by a 20-year-old Poe, it seemed to reveal some of the inner turmoil that was always within the author, as well as foreshadow his shortened life. Though the provenance is a little unclear, it was donated by a woman named Emma Welbourn in 1969, who was most likely a descendant of Ms. Holmes. Not a lot is known of Lucy Holmes, except that she was known to be active in the literary circles of Baltimore. She most likely had Poe write the poem in her ledger sometime in 1829. This was a time period in Poe’s life shortly after he left West Point and returned to Baltimore. The fact that he wrote this poem in the ledger of a wealthy socialite provides fairly strong evidence that he was not a homeless wanderer at this point in his life as some have suggested.

Original
From childhood’s hour I have not been As others were—I have not seen
As others saw—I could not bring
My passions from a common spring—
From the same source I have not taken
My sorrow—I could not awaken
My heart to joy at the same tone—
And all I lov’d—I lov’d alone—
Then—in my childhood—in the dawn
Of a most stormy life—was drawn
From ev’ry depth of good and ill
The mystery which binds me still—
From the torrent, or the fountain—
From the red cliff of the mountain—
From the sun that ’round me roll’d
In its autumn tint of gold—
From the lightning in the sky
As it pass’d me flying by—
From the thunder, and the storm—
And the cloud that took the form
(When the rest of Heaven was blue)
Of a demon in my view— Though Poe’s poem is what truly makes this book unique, there are also approximately 100 other poems by Baltimore poets contained in its pages.  The great majority of the poems seem to be written with the goal of pursuing courtship with Ms. Holmes. Poe’s poem stands out from the crowd by being autobiographical, dark, and depressing—pretty much the opposite tone of every other poem in the volume. It is not, however, the only poem in Edgar Allan Poe’s handwriting in the small book. At his brother W.H. Poe’s request, Edgar Allan copied one if his poems on the very next page. Once again it seems like another piece of literary sleaze with the purpose of impressing Lucy. The assumption that Lucy’s favor could be won with flattery was not completely baseless. One of the poets, “Isaiah” (or “I…  B….N”) who appears frequently in the ledger is most likely Isaiah Balderston, whom Lucy ended up marrying in 1830. If heavy handed love poems tickle your fancy then by all means come visit us at the H. Furlong Baldwin Library—we’d be happy to make this volume available for your perusal! (Eben Dennis) This poem from I.. B…N may have been the very one that titillated young Lucy. I guess she wasn’t impressed by Edgar’s demons. MS 1796, MdHS