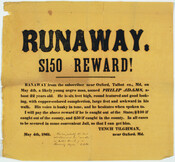 A broadside created by Tench Tilghman advertising a reward for finding and detaining Philip Adams, an enslaved man who had run away from the Tilghman property in Talbot County, Maryland. The broadside provides a description of Adams and the various reward scenarios for his capture.

Full transcription:
Runaway. $150 Reward! Ranaway from the subscriber near Oxford, Talbot co., Md, on May 4th, a likely young negro man, named Philip Adams, about 22 years old. He is six feet high, round featured and good looking, with copper-colored complection, large feet and awkward in his walk. His voice is husky in tone, and he hesitates when spoken to. I will pay the above reward if he is caught out of the State; $100 if caught out of the county, and $50 if caught in the county. In all cases to be secured in some convenient Jail, so that I can get him. Tench Tilghman, near Oxford, Md. May 4th, 1861. [Noted directly on the broadside in pen:] This was probably the last advertisement ever made in Talbot County of a Runaway negro. S.A.H.