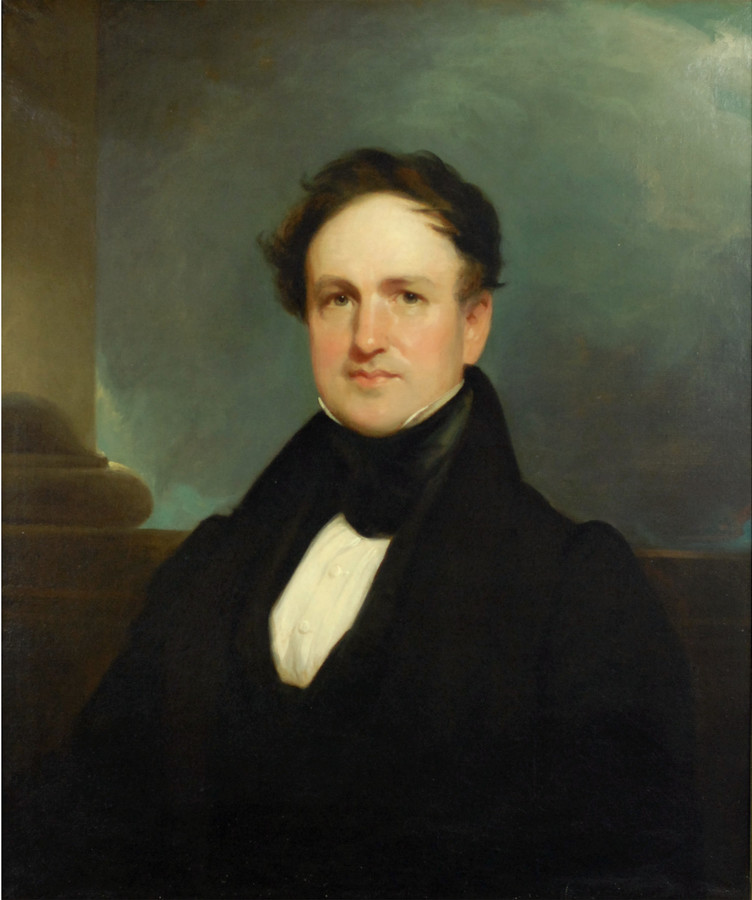 Oil on canvas portrait painting of "Benjamin Chew Howard" (1791-1872), ca. 1818, attributed to Henry Inman. Benjamin, born at "Belvidere" in Baltimore, was the son of Revolutionary War colonel, governor, and U.S. Senator of Maryland John Eager Howard (1752-1827) and Margaret "Peggy" Chew Howard (1760-1824). He graduated from Princeton University in 1809 and attended Law School in Connecticut. In 1814, during the War of 1812, he served as a Captain in the 1st Mechanical Volunteers, Maryland Militia, and participated in the Battle of North Point. After the war, he continued his volunteer service in the Maryland Militia with the 5th Regiment and rose to the rank of Brigadier General. In 1818, he married Jane Grant Gilmor Howard (1801-1890) and the couple had twelve children. Benjamin was a politically-active Democrat and was elected to numerous positions in his life, including: Baltimore City Council (1820); Maryland House of Delegates (1824-1825); 5th District, U.S. House of Representatives (1829-1833); 4th District, U.S. House of Representatives (1835-1839); Maryland State Senate 1840-1841); Reporter of Decisions of the Supreme Court of the United States (1843-1861). In 1861, President James Buchanan sent Benjamin with a group of emissaries to the south to attempt to negotiate peace before the outbreak of the Civil War. That same year, he unsuccessfully ran for Governor of Maryland. Benjamin died at his home and is buried in Green Mount Cemetery, Baltimore, Maryland.