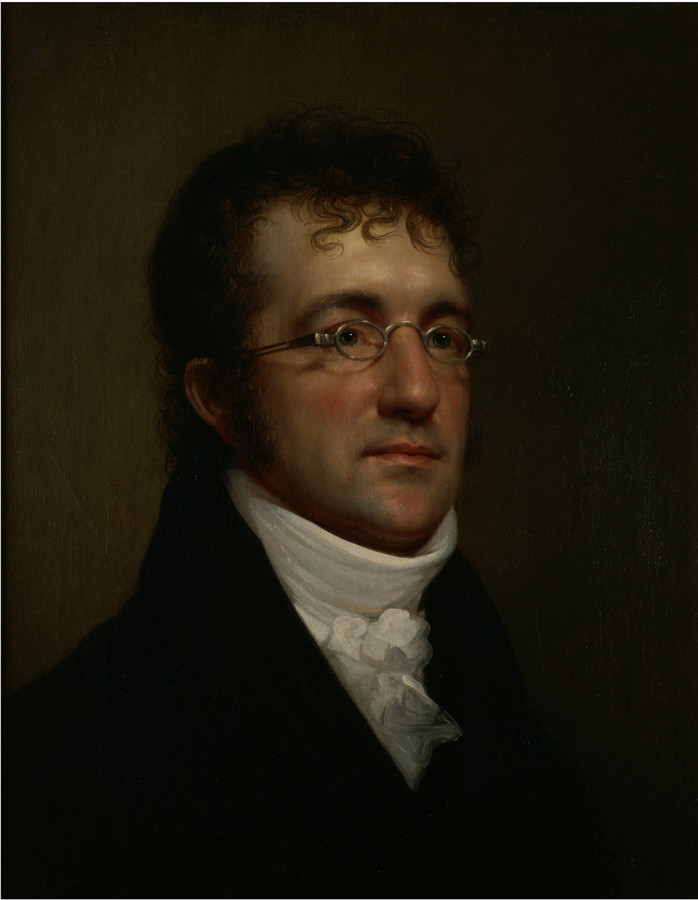 Oil on canvas portrait painting of "Benjamin Henry Latrobe" (1764-1820), ca. 1815, by Rembrandt Peale. Latrobe was born in Leeds, Yorkshire, Great Britain, and at the age of twelve, traveled to Germany to study. He later joined the Royal Prussian Army and traveled extensively around the continent. Latrobe married Lydia Sellon Latrobe (1760-1793) in 1790. The couple had two children: Lydia Sellon Boneval Latrobe (1791-1878) and Henry Sellon Boneval Latrobe (1793-1817). She died in childbirth. Latrobe suffered a breakdown from this tragedy and emigrated to the United States, arriving in early 1796. He went on to become one of the most important architects in American history, and designed many notable buildings, including: the Baltimore Basilica, Baltimore Exchange, United States Capitol Building, and the National Bank of Philadelphia, among others. During his time in the United States, Latrobe lived in Richmond, Philadelphia, Washington, D.C., and New Orleans. He remarried in 1800 to Mary Elizabeth Hazelhurst Latrobe (1771-1841) and the couple had three children: Juliana Elizabeth Boneval Latrobe (1801-1801), John Hazelhurst Boneval Latrobe (1803-1891), and Benjamin Henry Latrobe, Jr. (1806-1878). Like their father, several of Latrobe's children were also major contributors to architecture, engineering, and art. The great architect and artist succumbed to Yellow Fever in 1820. He is buried in Saint Louis Cemetery Number One in New Orleans. Among the paintings of Latrobe, and other architectural drawings, the Maryland Center for History and Culture is home to his watercolor and ink sketchbooks.