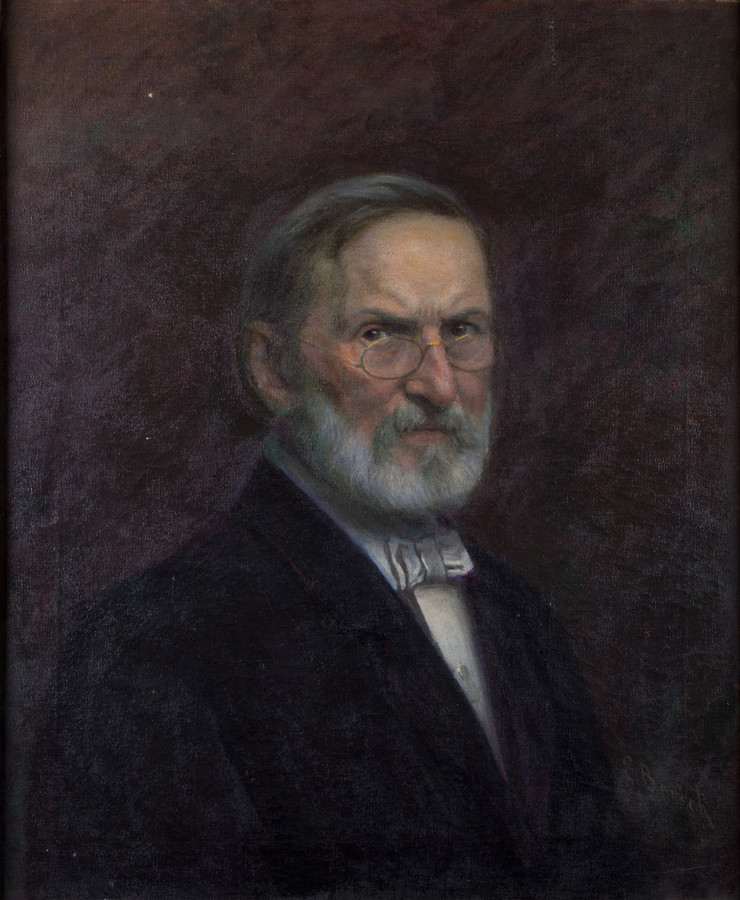 Oil on canvas self portrait painting of "Carl Bersch" (1834-1914), ca. 1900-1910, by Carl Bersch. Born Carl Friedrich Eduard Bersch in Zweibrücken, Germany, he initially studied theology at University of Munich before attending Munich Academy of Fine Arts as well as the Technical University of Munich. After graduating from art school, he returned to Zweibrücken to work as a portrait painter. Bersch emigrated to the United States in 1861. In 1865, he married Angelica Bode Bersch (1845-1925), daughter of Dr. William Bode (1804-1866), the founder of Towson Sanatorium. Bersch was sitting on a porch in Washington, D.C., near Ford's Theater, the night of President Abraham Lincoln's (1809-1865) assassination. He later captured the street scene outside the theater in "Lincoln Borne By Loving Hands" (1865). Bersch went on to paint portraits of General Ulysses S. Grant, General Severn Teackle Wallis, and Archbishop James Cardinal Gibbons (1977.27.10; 1977.27.11), among many other individuals. For several years, he operated his portrait business out of an office of Bachrach Studios on the corner of Eutaw and Lexington Streets in Baltimore. Bersch is buried in Govans Presbyterian Churchyard, Baltimore, Maryland. The Maryland Center for History and Culture owns several dozen works by Bersch, including one of the artist's sketchbooks.

Gift of the Estate of Gerda Erwine Fischer Vey