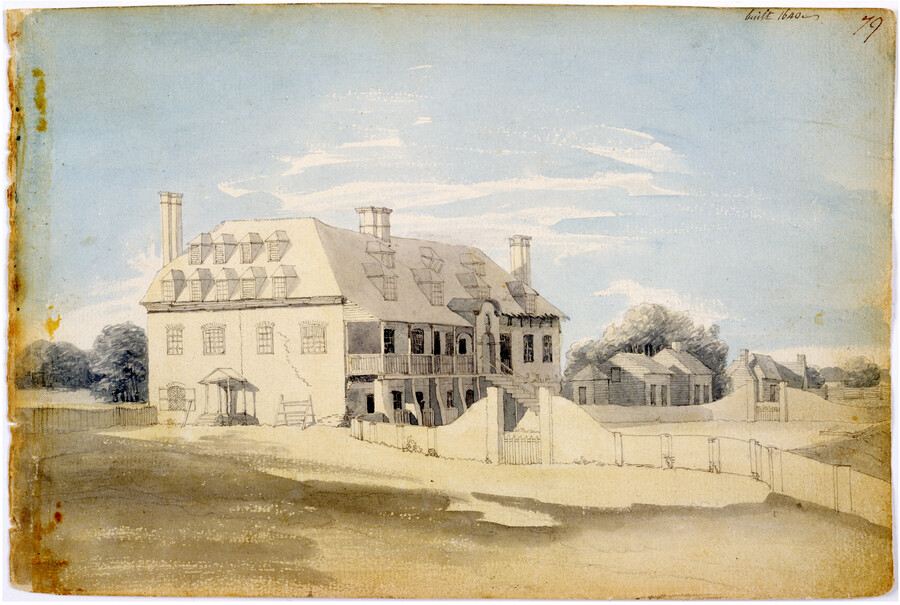 Watercolor on paper drawing of "Greenspring, home of William Ludwell Lee, James City County, Virginia", ca. 1796-1798, from the Latrobe Sketchbooks, by Benjamin Henry Latrobe. "Green Spring", was built in 1645 by Governor William Berkeley (1607-1677) a few miles west of Williamsburg, Virginia. The plantation expanded to more than two thousand acres and produced goods such as silk, cotton, flax, hemp, and rice. Following the governor's death, the plantation eventually fell into possession of the Ludwell family for several generations. In 1795, following the death of American Diplomat William Lee (1739-1795), his son William Ludwell Lee (1775-1803) took possession of the property. The new owner invited Latrobe to visit "Green Spring" and make recommendations for the future structure. Latrobe described the home in his journal on August 3, 1796: "It is a brick building of great solidity, but no attempt at grandeur...It is Mr. Lee's intention to pull down the present mansion and to erect a modest Gentleman's house near this spot. The antiquity of the old house, if in any case, ought to plead in the project, but its inconvenience and deformity are more powerful advocates for its destruction. In it, the oldest inhabited house in North America will disappear...". A few years later, Lee abandoned the property and had the house dismantled.