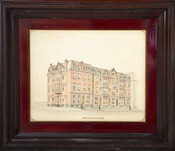 Watercolor and ink on paper, presented in ornate finished wood mat, frame, behind glass. The frame was also likely made by the artist, who was a trained carpenter and architect.

Henry Smith, Jr. (1853-1916) was born in Maryland and was the son of German immigrants. He attended public schools and the Maryland Institute (MICA) to study architecture. His father, Henry Smith, Sr. (1831-1890) was a carpenter and builder who established his building firm around 1862. By the 1880s, the firm was renamed Henry Smith & Son. Following his education at the Maryland Institute (MICA) in the early 1870s, he is listed as a carpenter in directories and the census. According to the donor, he drew the ink and watercolor sketch of "Houses - Corner of Park Avenue & Mosher Street". Located at 1500-1512 Park Avenue, these fine houses were built around 1885-1886 and are still there today. In March 1886, a three-week worker's wage strike, by the Marble and Freestone Cutters' Union of Baltimore, occurred during the building of these houses. After Smith, Sr. died in 1890, Smith, Jr. took over as head of the company and it was renamed Henry Smith & Sons. His brothers and business partners were Henry A., John A., and William A. Smith. Besides homes, the company built the Rennert Hotel, Music Hall, various churches, and several structures for the State of Maryland in Annapolis. Smith, Jr. died in 1916 and is buried in Loudon Park. At the time of his death in 1916, Henry Smith, Jr. lived at 1500 Park Avenue with his family, depicted in this watercolor. The homes remain occupied today.