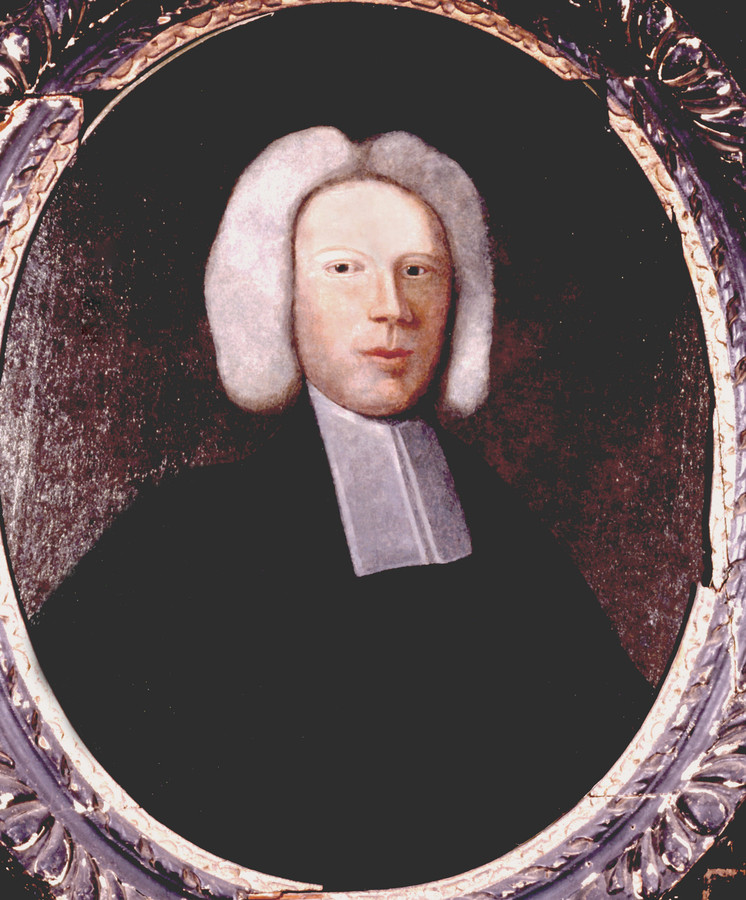 Oil on canvas portrait painting of "Reverend John Eversfield", 1742, by Gustavus Hesselius. Eversfield was born in England, graduated from Oxford in 1727, and an ordained priest. He was appointed by Lord Charles Calvert, 5th Baron of Baltimore (1699-1751), as head of St. Paul's Parish, near Brandywine, Prince George's County, Maryland. He emigrated to Maryland and arrived on February 8, 1728. In 1730, he married Eleanor Clagett (1712-1781) and they had eight children. In May 1742, Eversfield commissioned artist Gustavus Hesselius to paint three portraits for £9 and 9 schillings. One of the three was of Mrs. Eversfield (1977.7.3). Around 1745, Eversfield established Lower Marlboro Academy in Lower Marlboro, Maryland where many young people of southern Maryland came to attend school. During this period, he also helped establish the Episcopal St. Thomas' Church in Croom, Maryland. His home, nearby the church, was named "Eversfield's Map of Italy." During the American Revolution, Eversfield was a staunch loyalist and publicly prayed for King George III. He was ultimately arrested, stripped of his property and wealth, and imprisoned for a time by the provisional government. Eversfield's land and property was eventually restored due to the loyalty of his parish members in the county. He died in 1780 and is buried beneath the altar at St. Thomas' Church. Death records state that he was the owner of a large property, house, and livestock and that he enslaved numerous people.