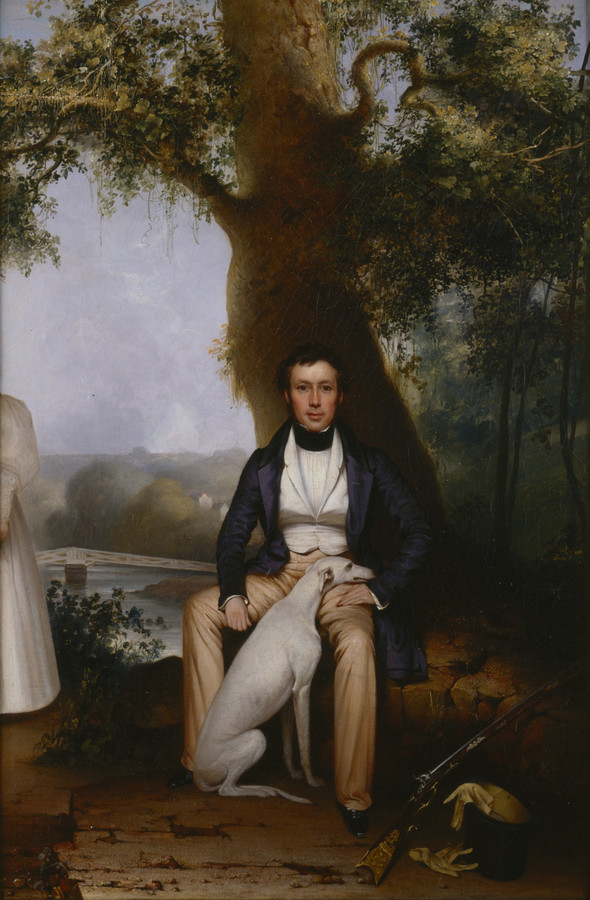 Oil on canvas painting of John Pendleton Kennedy (1795-1870) with a Greyhound dog named Lightfoot and woman in a white dress, 1831, by William James Hubard. Kennedy was born in Baltimore and graduated from Baltimore College in 1812. During the War of 1812, he joined "United Company", 5th Baltimore Light Dragoons, Maryland Militia, and participated in the Battles of Bladensburg and North Point. After the war, he became a lawyer, novelist, and politician. Kennedy's first appointment was in the Maryland House of Delegates (1820-1823). He served two stints as a congressman for Maryland's 4th District in the U.S. House of Representatives (1838-1839 and 1841-1845). Throughout his political career he advocated for investments in the Chesapeake & Ohio Canal, the Baltimore & Ohio Railroad, and the telegraph. From 1852-1853, Kennedy served as Secretary of the Navy under President Millard Fillmore. He was an early, vocal abolitionist and was a key figure in bringing the institution of slavery to an end in Maryland. Kennedy was married three times, widowed twice, and had one child. He died in Newport, Rhode Island and is buried in Green Mount Cemetery, Baltimore, Maryland.