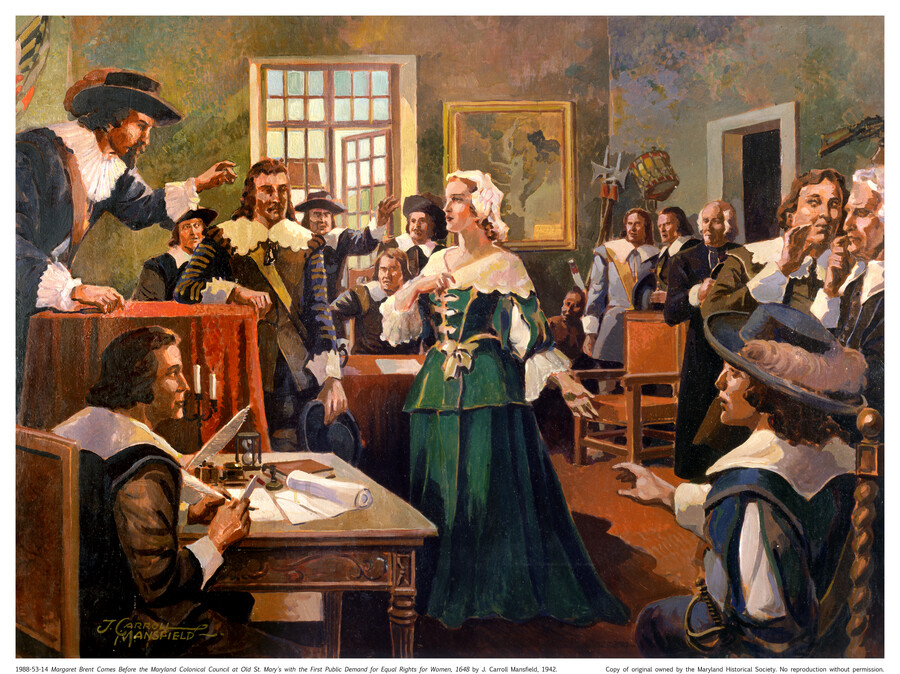 Oil on board painting of "Margaret Brent Comes Before the Maryland Colonial Assembly", 1942, by J. Carroll Mansfield. Margaret Brent (c. 1601- c. 1671), an English immigrant, came to the Province of Maryland in 1638. She arrived at the new colony as the head of her own household, claimed a land grant, and traded in tobacco, land, and indentured servants. In 1647, Leonard Calvert (1606-1647), Governor of Maryland, died after a long illness. Before his death, he named Brent as executrix of his will. A court also appointed her as the emergency attorney for Calvert’s brother, Lord Baltimore, the absentee proprietor of the colony. On January 21, 1648, she appeared before the General Assembly and requested two votes: one as a landowner, and one as Lord Baltimore’s attorney. While her request to vote was denied based on gender, she was arguably the first woman to ask for the vote in the New World. This painting was one of dozens of colonial Maryland scenes that Baltimore artist James Carroll Mansfield (1896-1957) created in the 1940s. The Maryland Center For History and Culture is home to more than fifty works by this artist.