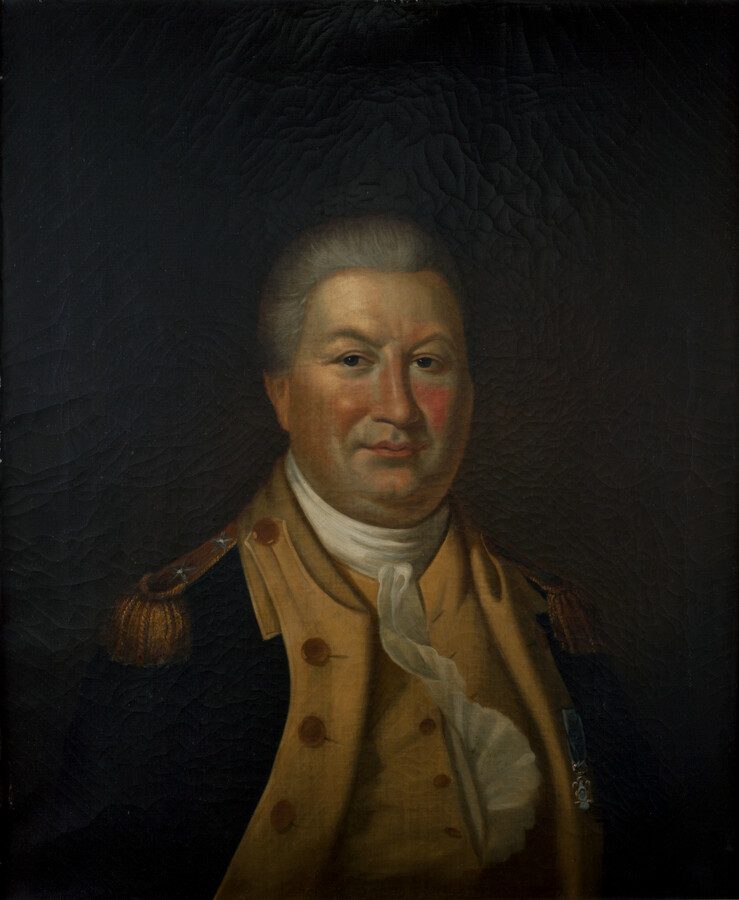 Oil on canvas portrait painting of William Smallwood (1732-1792), 1853, by James K. Harley after Charles Willson Peale or Rembrandt Peale. Smallwood was born in Marbury, Charles County, Maryland to a prominent planter family. He entered into politics in 1761 and served in numerous positions prior to the American Revolution, including: Lower House, Maryland Colonial Legislature (1761-1763, 1765-1766, 1768-1771, 1773-1774); Justice, Charles County (1762, 1770-1773); Committee of Observation, Charles County (1774) Delegate, Charles County, Maryland Convention (1774-1776). At the outbreak of the Revolutionary War in 1776, Smallwood was appointed colonel of the 1st Maryland Regiment. He was wounded at the battle of White Plains (1776) and participated in the Battles of Germantown (1777), and Camden (1780). He finished his military career as a Major General in the Continental Army. Smallwood was elected Governor of Maryland from 1785-1788 and to the Maryland Senate in 1791. He never married or had children. He lived at "Smallwood's Retreat" in Marbury, Maryland with over twenty slaves at the time of his death. He is buried in Smallwood State Park. In 1853, the Maryland Historical Society commissioned James K. Harley (1828-1889) to make a copy of Charles Willson Peale's (1741-1827) portrait of General Smallwood. He wears his Continental Army officers uniform and his Society of the Cincinnati medal.