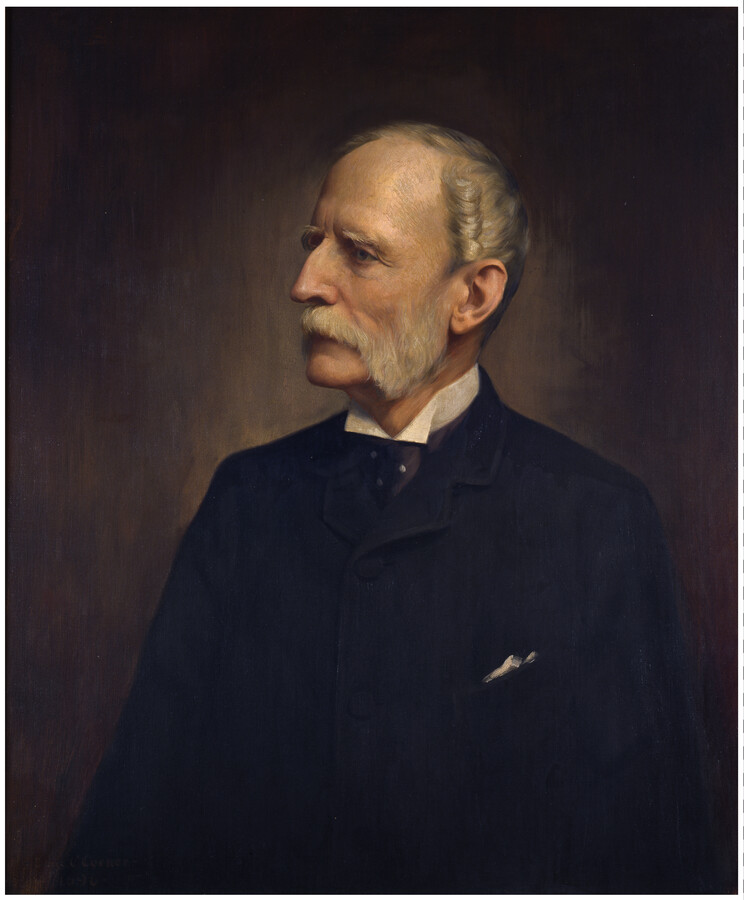 Oil on canvas portrait painting of "Severn Teackle Wallis" (1816-1894), 1896, by Thomas Cromwell Corner. Wallis was born in Baltimore, Maryland, and attended St. Mary's College (Baltimore), graduating in 1832. He went on to study law and passed the bar exam in 1837. Wallis developed a special interest in history and literature, particularly from Spain. Proficient in the Spanish language, in 1849 he was sent by the U.S. Government to Spain to study the original land titles of what became the state of Florida. Throughout his life, he wrote numerous periodicals and pamphlets on Spain, history, and was a frequent contributor to the "Baltimore Exchange" newspaper. In 1861, he was elected to the House of Delegates in the Maryland General Assembly. Initially a member of the Whig party, he became a Democrat by the Civil War and was opposed to the war as well as secession. Wallis was one of several Maryland legislators that were arrested for refusing to take an oath supporting the union. He was imprisoned at Fort McHenry from September 1861 to November 1862, never charged, and never told why he imprisoned. A fellow prisoner, Henry Mactier Warfield, later named his youngest son, Teackle Wallis Warfield, in honor of his friend. The son later named his daughter Bessie Wallis Warfield, better known as Wallis Simpson, who went on to become the Duchess of Windsor. Upon his release, he left politics and returned to private practice. Wallis is memorialized as a statue near the Washington Monument in Mount Vernon and at the Circuit Court of Baltimore City. He is buried in Green Mount Cemetery in Baltimore.