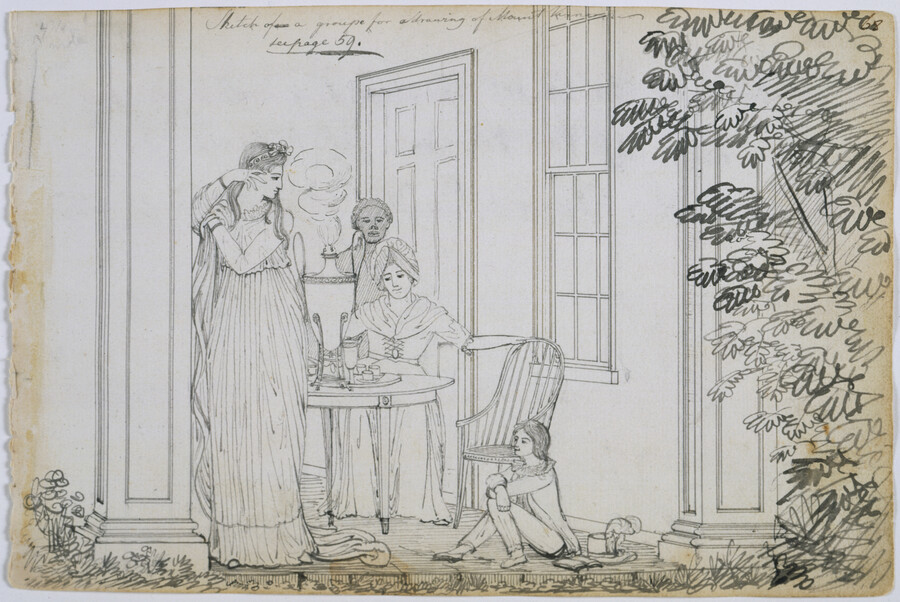 Sketch of a groupe for a drawing of Mount Vernon

Pencil on paper drawing of "Sketch of a groupe for a drawing of Mount Vernon", July 1796, from the Latrobe Sketchbooks, by Benjamin Henry Latrobe. On July 16, 1796, Latrobe journeyed to President George Washington's Virginia estate "Mount Vernon" to deliver a letter from Washington's nephew, and Latrobe's friend, Bushrod Washington (1762-1829). At about 3:30 that afternoon, Latrobe dined with the President, his wife Martha (1731-1802), Martha's granddaughter Eleanor Parke Custis Lewis (1779-1854), and Georges Washington Louis Gilbert de Lafayette (1779–1849). Following dinner, other guests arrived and they enjoyed coffee and further conversation on the portico. This sketch, which was published in "The Journal of Latrobe", features Eleanor Custis standing at left, Martha Washington sits at the table near the coffee pot, an unnamed African American slave footman stands behind her, and one of Tobias Lear's (1762-1816) sons sits on the ground. Lear was President Washington's personal secretary from 1784-1799.