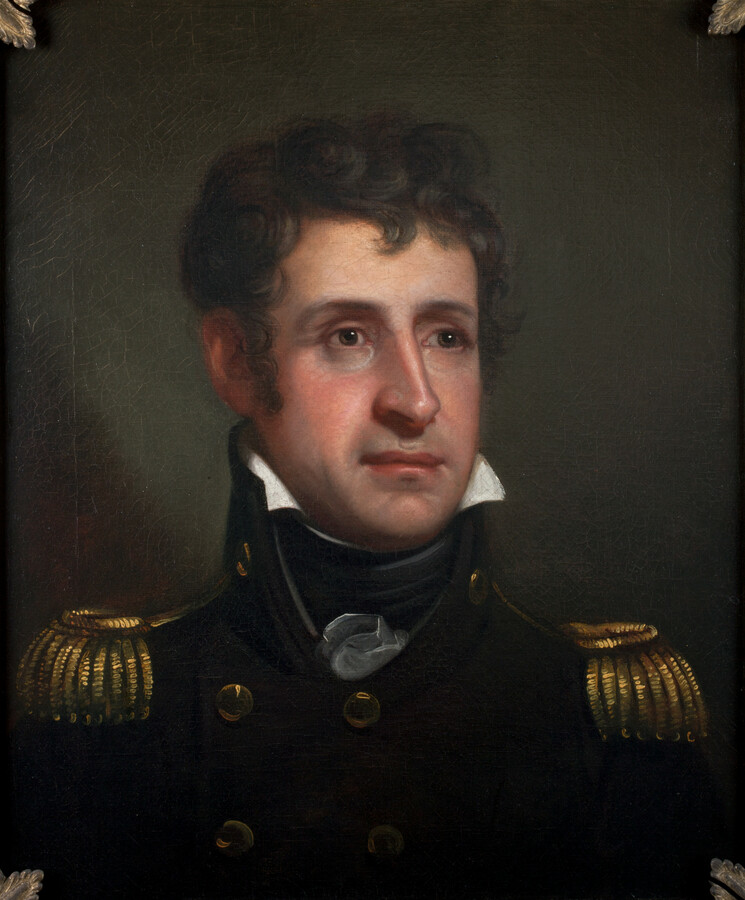 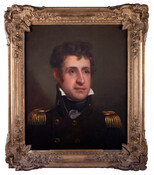 Oil on canvas portrait painting of "Stephen Decatur, Jr." (1779-1820), ca. 1813, by Rembrandt Peale. Decatur was born in Sinepuxent, Worcester County, Maryland and was the son of Captain Stephen Decatur, Sr. (1751-1808) and Ann Pine Decatur (1755-1812). Decatur, Sr. was a merchant captain before the American Revolution. During the Revolutionary War, he worked as a privateer, became very skilled at capturing British vessels, and commanded "Royal Louis," "Retaliation," "Rising Sun," and "Fair American." The elder Decatur later served in the U.S. Navy from 1798-1800 during the Quasi-War and retired with the rank of post-captain. Decatur, Jr. developed his love of the sea during an Atlantic crossing at the age of eight. He attended Woodbury Academy in Woodbury, New Jersey before enrolling in the University of Pennsylvania in 1795. Higher education was disagreeable to Decatur who wanted to return to the sea. Through his father, he gained employment through a Philadelphia shipbuilding firm and helped construct USS "United States" (1797). After completion, he obtained a commission as a midshipmen aboard the frigate and served under the command of Commodore John Barry (1745-1803). He served with distinction during the Quasi-War and was promoted to lieutenant in 1799. Decatur later took part in the First Barbary War and the attacks on Tripoli. It was during this time that he was promoted to captain. At 25 years of age, he remains the youngest to ever attain the rank in the history of the U.S. Navy. During the War of 1812, he held numerous commands, saw combat, was wounded, briefly captured and imprisoned, and attained the rank of commodore. From 1816-1820, he lived in Washington, D.C. and served on the board of Navy commissioners. Decatur's life came to a tragic end in a duel with Commodore James Barron (1768-1851). He left behind a wife and several children and is buried at Saint Peter's Episcopal Churchyard in Philadelphia, Pennsylvania.

This portrait was purchased from the Peale Museum in Baltimore by Maryland landscape painter Charles S. Getz (1822-1908), who sold it to the Maryland Historical Society in 1857.