Traveling through History: Stories of the Northern Central Railroad during the Civil War

The Northern Central Railroad Trail (NCR) in the GunpowderFallsState Park is a popular destination in northern Baltimore County for those who enjoy the great outdoors. Walkers, runners, and horseback riders enjoy the trail year-round; kayakers and tubers paddle and splash through the river in the warmer months; anglers and fly fishermen bask in the GunpowderRiver which boasts an impressive amount of perch, sunfish, and trout.  But this idyllic playground for all ages has a storied past and played a much different role 150 years ago during the Civil War.

The Northern Central Railroad was originally called the Baltimore & Susquehanna Railroad.  For decades, the company suffered from severe financial problems, despite its frequent use transporting passengers and freight between Maryland and Pennsylvania. The final blow to the B & S Railroad occurred on Independence Day in 1854 when two trains collided with deadly results. As a result of both the accident and financial difficulties, the old charter was dissolved. A new charter created the Northern Central Railroad by combining four old railroad companies: the Baltimore & Susquehanna, the York & Maryland Line, the York & Cumberland, and the Susquehanna. After the merger, finances improved, but financial security was not assured until the Pennsylvania Railroad became the majority stockholder in 1861 – just as the country’s social and political fabric was being ripped apart.

Although the NCRR was a critical route for transporting soldiers, supplies, and civilians between the north and WashingtonDC during the Civil War, it was more than just a railroad. Major events occurred along the line with both local and national impact. This post tells some of the most iconic or symbolic stories that happened during those years that are connected to the Northern Central Railroad. 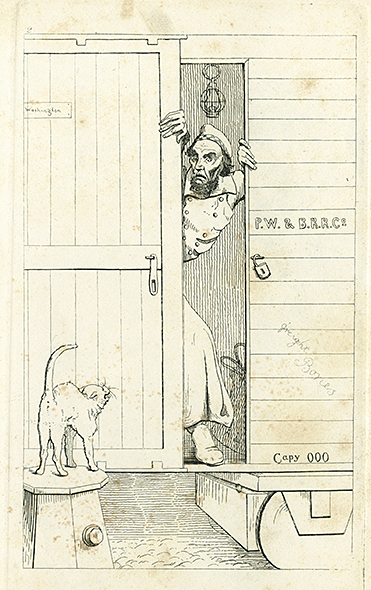 The first story regarding the NCRR never happened. In February 1861, Abraham Lincoln, the (controversial) President-elect, left Springfield, Illinois for his inauguration. His train traveled through eight states before reaching Washington DC. The final stages of Lincoln’s itinerary included a flag-raising at Independence Hall in Philadelphia and a visit to the Legislature in Harrisburg. Lincoln originally planned on leaving Harrisburg on February 23 via the Northern Central Railroad to attend a dinner at Eutaw House in Baltimore. These plans abruptly changed when his security heard rumors of an assassination plot against him. Under the advice of Allan Pinkerton, Judge David Davis, and Colonel Ephraim Ellsworth, Lincoln secretly changed his travel plans from a Northern Central Railroad line from Harrisburg through Baltimore to a Philadelphia to Baltimore line. Baltimore dentist and artist Adalbert Volck’s famous engraving captured the animosity that many Baltimoreans felt about Lincoln’s late night secret detour through Baltimore.

Just a few tumultuous months later, Fort Sumter in South Carolina was attacked, and President Lincoln called up 75,000 troops to protect the nation’s capital. Federal troops traveled to Washington DC via two railroads: the Northern Central Railroad and the Philadelphia, Wilmington & Baltimore Railroad. Both railroads stopped in Baltimore, a Southern sympathizing city, before continuing to Washington. After two days of federal troops passing through the city, violence broke out between Baltimoreans and the soldiers, mostly men from the 6th Massachusetts Regiment. As an attempt to quell the violence, Maryland Governor Thomas Hicks met with Baltimore Mayor George W. Brown and Baltimore City Police Marshal George Kane and passed an order to destroy railroad bridges and telegraph wires to prevent federal troops from entering the city. Isaac Trimble destroyed the bridges along the PW&B Railroad, and Captain J. G. Johannes destroyed bridges on the NCR at Melvale (near Cold Spring Lane) and Relay House (near Lake Roland). John Merryman of the Baltimore County Horse Guard traveled further north to destroy telegraph wires and burn bridges along the NCR in northern Baltimore County. Merryman was arrested and imprisoned at Fort McHenry for the destruction along the NCR. His imprisonment and Lincoln’s suspension of the writ of habeas corpus led to one of America’s most famous legal opinions in ex parte Merryman by another Marylander, Roger Brooke Taney. Dickinson Gorsuch, also of northern Baltimore County, wrote in his 1861 diary on Saturday April  20: “Awful excitement in Baltimore Massachusetts troop and Baltimoreans (sic) in fight yesterday. Military called out…” and again on Sunday April 21 “I come home from Baltimore in carriage. The bridges are burnt on the railroad . . .  terrable [sic]excitement in Baltimore. Military out all the time. troops camping at Cockeysville from Penn ai [sic]”

Bridges were destroyed – either wooden planks were burned or iron trestles were torn up – from Melvale on the edge of  Baltimore City through the Maryland line. Reports differ on exact locations or number possibly because many bridges had multiple spans. The 1861 Annual Report for the Northern Central Railroad only lists the Burns’ bridge specifically that was destroyed on April 19, but the next line itemizes damage for other bridges destroyed that same day costing $19,983.18

A month after the destruction, the railroad reopened despite the war. Benjamin H. Latrobe Jr. travelled to  Pittsburgh via the NCR and described his experience to his wife Ellen:

I arrived here without accident or detention yesterday morning at one oclock. The Northern Central RRd from the Balto to the Penna line was well guarded with Penna troops placed at every bridge + some other points. I was not subjected to any question whatever + but for  this display of military + for the [evidencies] of the Late bridge conflagrations on the ro ad I shd not have known any difference between this + former journees over the same road…” 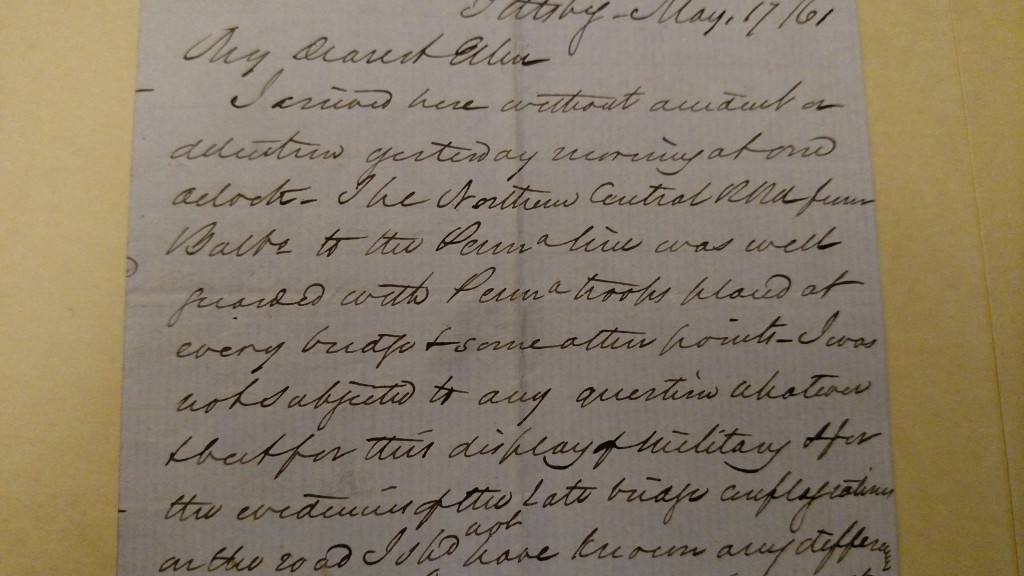 The NCR was a major asset to the Union during the Civil War. Troops and supplies moved safely between Washington DC and Baltimore to northern cities. And for the average civilian, transportation was unimpeded during the war. The NCR Company made money and was able to not only maintain the line, but to add a second track. In 1863, other parts of the NCR line that connected in Carroll County saw some damage during the Battle of Gettysburg, but not the lines in Baltimore County. In November of that year, Abraham Lincoln again traveled on the NCR to a new cemetery in Pennsylvania to give a small speech at a dedication ceremony that eventually became known as the Gettysburg Address.

The last raid on northern soil during the Civil War occurred during the summer of 1864 when Confederate troops under the leadership of General Bradley T. Johnson and Captain Harry Gilmor terrorized the people in the Cockeysville and Towson areas, taking supplies and damaging property, including parts of the NCR near Cockeysville. Part of the plan was to destroy Ashland Iron Works, but John Merryman (the same man who was arrested for torching NCR bridges in April 1861) dissuaded them from burning Ashland Iron Works, possibly in return for information from the manager of the furnace. Most of the damage on the NCR during this raid occurred south of Cockeysville or on the Green Spring Valley branch.

The NCRR held one final and significant honor at the end of the war. In April of 1865, after Lincoln was assassinated, his funeral train retraced the original route of his inaugural route in 1861, however, this time the train ironically took the Northern Central Railroad that was previously avoided because of an assassination plot.  Lincoln’s body traveled almost 1700 miles before reaching its final resting ground in Springfield. Thomas F. Johnson of Rockland on Falls Road in Baltimore County, remembered that day in his diary: 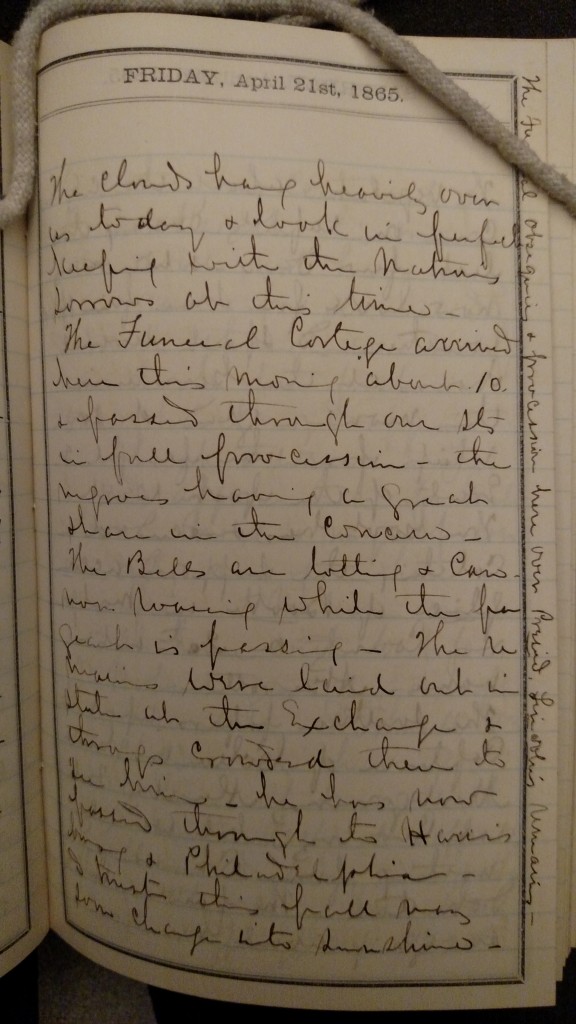 The clouds hang heavily over us today + look in fearful keeping with the Nations sorrows at this time. The Funeral cortege arrived here this mornig (sic) about 10 + passed through our sts in full procession – the negroes having a great share in the concern. The Bells are tolling + cannon roaring while the pageant is passing – The remains were laid out in state at the Exchange+ throngs crowded there to see him. he has now passed through to Harrisburg + Philadelphia – I trust this pall may soon change into sunshine…”

This is not the full history of the Northern Central Railroad – simply a collection of large events that impacted a nation — all connected by one railroad. The mid-twentieth century was not kind for the NCR. Trains began carrying fewer passengers and freight loads in the 1950s because of new reliance on trucks and the interstate highway. Damage caused by Hurricane Agnes in 1972 finally ended its use as a railroad. The Maryland Department of Natural Resources saw an opportunity with the abandoned railroad and purchased it in the early 1980s. Under the leadership of Torrey C. Brown and the assistance of many volunteers, the NCR Trail in the GunpowderStateFallPark opened to the public in 1984. In 2007, the trail was renamed the the Torrey C. Brown Trail, honoring the third Secretary of the Maryland DNR for his commitment to the project. Today the trail remains a popular place to enjoy nature and the beauty of Gunpowder Falls State Park. (Debbie Harner)

Here is a contemporary video and some images of the NCR Trail from the Harner family:

Scharf, J. Thomas. History of Maryland From the Earliest Period to the Present Day, Vol. III.  Baltimore: J. B. Piet, 1879.