“Home-made wines made of dandelions”: Prohibition in Maryland This Saturday night, the Young Defenders of the Maryland Historical Society will be hosting its second annual Bootlegger’s Bash party at the 1840s Plaza at 29 S. Front Street, the site of the old Peale Museum. In anticipation of this popular fundraiser we have decided to share a selection of photographs, documents, and ephemera of the Prohibition era from our archives.

When national prohibition went into effect on January 17, 1920, Maryland stood alone as the only state to refuse to enforce the new law prohibiting “the manufacture, sale, or transportation of intoxicating liquors.” According to the Eighteenth Amendment, the Federal and State governments were to have “concurrent power to enforce this article by appropriate legislation.”(1) Although Maryland became the sixth state to ratify the amendment, the state, led by outspoken anti-prohibition Governor Albert C. Ritchie, refused to pass a state enforcement law abridging its citizens right to imbibe. In his second inaugural address delivered on January 9, 1921, Ritchie laid out his opposition to national prohibition as an infringement on Marylander’s liberties:

“It is not my purpose in this connection today to complain of an unwarranted invasion by the Federal Government of the liberties of the Maryland People. It is not my purpose now to contend that this vast burden of taxation must in no event be imposed. It is not even my purpose to contend that under no circumstances must Maryland join in what so large a part of her citizenship honestly believe to be a denial of their guaranteed rights. But it is my purpose to ask you do not do this thing unless and until Maryland has had her day in court, and her people have had the opportunity to decide for themselves, as free Americans at the polls, whether they want this restriction on their liberties or whether they do not.”(2)

While many probably agreed with Ritchie’s proclamation defining the legal argument against prohibition, more were probably in line with the sentiment on the law’s repressiveness as expressed by H.L. Mencken in a lengthy diatribe that appeared in the November 1920 issue of The Smart Set : 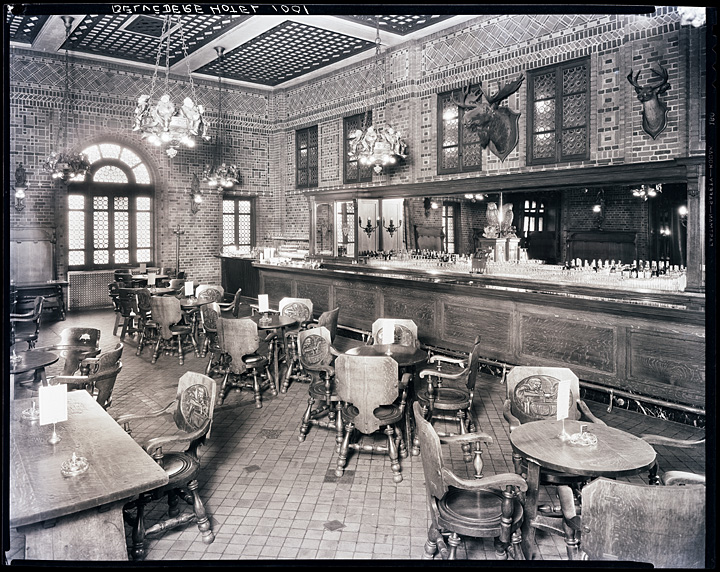 The Owl Bar in the Belvedere Hotel in Mount Vernon was probably the most renowned of Baltimore’s speakeasies. “No one knows exactly when the owl theme or name set in, but legend has it that during the Prohibition Era the bar was a speakeasy where two prominently displayed ornamental owls served to tip off patrons. An eye blinked on each owl when liquor was available and the coast was clear of feds. One of the owls still sits on the bar today.”(5)
Baltimore Hotels Inns & Taverns Belvedere Hotel 1934 Interiors Barroom, Unknown photographer, SVF, MdHS.

“From bad gin at $95 a case and from bootleggers who promise to dig up some genuine Rhine wine and are then never heard of again; from home-brewed ale with a faint, cyanotic flavour of dishwater and from home-brewed ale with so much steam in it that it squirts all over the ceiling when the bottle is opened;…from vermin who invite one to dinner parties in remote suburbs promising leeringly to get one stewed, and then turn out to have nothing on tap save a quart of drug-store rye whiskey and two bottles of American curacao;…from home-made wines made of dandelions, elderberries and other such garbage, recommended by grandmothers too respectable to be handed over to the police; from barbarians who invite one to dinner and serve only one cocktail; from Presidential candidates who run as wets in New York and as drys in Elyria, Ohio;…from moonshine corn whiskey, two days old, at $30 a gallon, and from Prohibition spies who agree to get one a case of genuine Chambertin for $27, and then try to palm off a case of corked California Barbera;…from hard cider that turns out to be full of salicylic acid and from absinthe in bottles showing the coat-of-arms of the Glassblowers’ Union of Allentown, Pa. – good Lord, deliver us!”(3)

Although the state government was not cooperating with prohibition, it was still the law of the land, and bootlegging was big business in Maryland. During the period of prohibition Maryland was one of the “wettest” states, and Baltimore one of the “wettest” cities.The Chesapeake Bay was a prime entryway for illegal booze. Whiskey was shipped in to Baltimore from distilleries in Western Maryland. Baltimore was full of speakeasies, like the Owl Bar (then known as the bar at the Belvedere Hotel). Many made their own intoxicants, including Mencken, whose first attempt at home-brewing beer turned into disaster when he bottled the contents too soon “with the result that every single bottle he put into the garden to cool suddenly exploded like a burst of gunfire, greatly alarming his neighbors.”(4)

Opposition to prohibition spread across the nation through the 1920s. By 1928, Maryland had been joined by 28 states refusing to continue the enforcement of  the prohibition act. When the Eighteenth Amendment was repealed on December 15, 1933 with the passage of the Twenty-First Amendment, state resistance, led by Maryland, was one of the principal factors in its downfall. (Damon Talbot) The United States Congress passed the Wartime Prohibition Act on November 18, 1918 prior to ratification of the Eighteenth Amendment, as a temporary measure to conserve grain during World War I. The Act took effect on June 30, 1919. Enforcement began the next day, July 1, which came to be known as the “Thirsty-First” of June.
Jefferson Liquor Company storefront with customers, June 1919, 15 North Liberty Street, Baltimore, Maryland, Subject Vertical File, MdHS. With the outlaw of alcoholic beverages during prohibition, many turned to home-brewing. “Malt and Hops” stores, which sold malt extracts for “baking”, spread through cities across the United States. This one was located on East Biddle Street in Baltimore. By 1929, the Prohibition Bureau estimated that over 700 million gallons of beer had been home-brewed since prohibition was instituted.
Street Scene Storefront. Malt and Hops Store, East Biddle Street, Baltimore, circa 1930, Baltimore City Life Museum Collection, MC9249-1, MdHS. The Association Against the Prohibition Amendment was founded in 1918 in an unsuccessful effort to prevent the passage of the eighteenth amendment. It continued to grow in influence as opposition to prohibition spread – by 1926 the organization counted over 700,000 members nationwide. By 1927 they had also broadened their political platform.
The Association Against the Prohibition Amendment, membership card for W. Clinton Duffy, 1927, Political Ephemera Collection, MdHS. Group (with beer steins). Taken from an old photograph for use in an advertisement: September 30, 1935, circa 1900, Baltimore City Life Museum Photograph Collection, MC7171, MdHS.

(1) The Eighteenth Amendment to the Constitution of the United States, Law/Cornell.edu, accessed February 18, 2014.

Association Against the Prohibition Amendment, Alcohol: Problem and Solutions.

Jabloner, Amy, “Homebrew during Prohibition,” Brew your own, December 1997.

The Rise and Fall of Prohibition in Baltimore, Maryland, 1918-1933, Maryland State Archives.