King Alcohol: Temperance and the 4th of July

The anti-alcohol crusade of the nineteenth century lives on as one of the most notable and far reaching reforms of the era. The temperance movement brought about Prohibition, and its shadow still affects liquor laws today. The proponents of temperance, as the shapers of a new nation, sought to perpetuate the Founding Fathers’ lofty ideals, and sobriety, reformers decreed, stood at the center of civic responsibility and moral integrity.  It was a passionate yet calculated reaction to the turbulent years of the American Revolution. 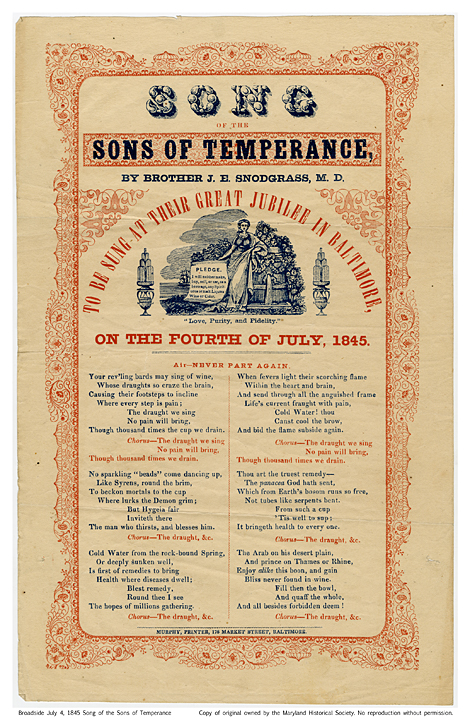 The American Temperance Society, organized in 1828, counted ten thousand groups within four years and reported upwards of 500,000 members. The Baltimore Temperance Society – the first in Maryland – organized in late 1829, and by the eve of the Civil War dozens of groups and thousands of people supported the promise of a sober republic, most visibly in Fourth of July activities such as parades and picnics.

Songs, stories, and poems in male-centered temperance literature salute the brotherly camaraderie, sobriety, and cold water—and uniformly condemn intemperance. Longtime temperance gadfly, Joseph Snodgrass* wrote a song for the Sons of Temperance “to be sung at their great jubilee in Baltimore, July 4, 1845.” This stanza from the Pledge Glee illustrates the austere character of the songs:

“We’ll pledge anew each passing week
A brother’s love—a brother’s hand
And still the fallen, cheerless, seek
To bring within our Happy Band
Our pledge of Love,
Taught from Above,
Shall drive intemperance from our land….”

Temperance men, particularly the Sons, expressed a vibrantly patriotic identity, rich in the symbolism and rhetoric of American independence, one that they felt logically included freedom from alcohol. Many had rejected the habits and examples of the hard drinking Revolutionary generation, who sought companionship and exchanged radical ideas in taverns. Many in this younger generation declared independence from the tyranny of “King Alcohol” and from a masculine identity linked with drinking “ardent spirits” and wanted to create a patriotic identity of their own. Are you ready to take the Pledge for genuine sobriety? Detail of Brother J.E. Snodgrass’s Temperance song.

Sons of Temperance officers and members, adorned themselves with patriotic regalia, “for a subordinate division, a white linen collar, with a rosette of red, white, and blue, with two white tassels suspended from the rosette.” Patriotism in antebellum America served as a civic religion for those who idealized the Founding Fathers and the still-new United States. “Residents of the young republic consecrated the state’s origin and made a fetish of the union that resulted.” This era saw the rise of the country’s state historical societies, a plethora of romantic paintings of the heroes, battles, and monuments of the Revolution, and a distinct American identity. Yet the meaning of patriotism varied between political and religious groups, all of whom incorporated their agendas and positions into grand public displays, particularly on the Fourth of July.

Liberation from the liquid tyrant made good copy in print and oratory, “Our fathers on that day threw off the shackles of British tyranny—their sons should scorn to permit themselves to be bound by the servile chains of intemperance.” Red, white, and blue regalia adorned proud breasts at public gatherings such as Fourth of July celebrations. On July 8, 1843, one older commentator noted that the “singularly striking” difference in recent Fourth of July celebrations and those of a “few years past [is] drinking.” In those bygone years, only those hearty enough to endure the “fatigue of a march and the danger of a carouse” participated in the honors paid to the day. “Now,” he noted, “children by the thousands, male and female, take the lead and learn . . . the lessons of sobriety and patriotism.” Yet in the not-so-distant-past, he recalled, only men who drank were considered patriotic. And this reflectively smug observer took care to mention the men who might drink throughout the year yet “take care not to disgrace the 4th.” In these few short sentences, the writer clearly articulated a changing expression of masculinity and pointedly mocked those who claimed genuine sobriety. Regardless of critics such as this one, the Fourth of July remained a popular public holiday for members of Maryland’s temperance societies. In Baltimore, Members of the Asbury Total Abstinence Society, the Old Wesley Temperance Sabbath School Society, and other “Temperance societies of Color” met at Mechanic’s Hall in Old Town and proceeded to Moschach’s Woods on the Bel Air Road, about three miles from the city. They spent the day singing with a choir, made up of singers from “different colored churches,” they prayed under the leadership of their president, Reverend Thomas Watkins, listened to addresses on the merits of total abstinence, and enjoyed a “delightful” dinner. There is no mention of patriotic rhetoric or pageantry as Baltimore’s free black community did not acknowledge white America’s liberty, choosing instead to commemorate Haitian independence on January 1st. This Fourth of July picnic spoke clearly of the group’s declaration of independence from alcohol.

In 1849, Sons across Maryland celebrated Independence Day. In addition to the Baltimore divisions gathering at Ryder’s Grove, where members sang a temperance song to the tune of “Oh Susannah!,” Sons gathered in Westminster, Carroll County, and processed to the Union Church where they opened the day’s festivities with a prayer, read the Declaration of Independence, and sang the “Ode to the Order.” Elkton Sons attracted 3,000 people to their parade, including members of the Northeast, Principio, and Susquehanna divisions. They too began the day with a prayer and a reading of the great document.

And 1862, the second summer of the Civil War, went by in much the same way as the previous year. Federal troops stationed in and around the city maintained control of a relatively quiet population, yet Baltimoreans celebrated the Fourth of July much as they had in the past, with picnics, excursions to the Eastern Shore, speeches, and fireworks. Thousands gathered at the Washington Monument, an “orderly” crowd, for a speech and a blessing. The largest number of people picnicked at “the great resort of the day,” Druid Hill Park, and “enjoyed plenty of pure water from its numerous springs.” Another group of families, “principally Germans,” had a picnic near Bel Air Road where “some were intoxicated, but with no disturbing results.” The reporter of this story linked drunkenness with ethnicity as had temperance reformers, and the majority of native-born citizens, from the earliest days of the reform’s activity. Those native-born picnickers, at Druid Hill Park this Fourth of July, drank only water, of course. (Dr. Patricia Dockman Anderson)

*In an ironic twist, Snodgrass owned and operated a tavern for about ten years. He inherited the business from his father but refused to continue to sell alcohol at the establishment. The business inevitably suffered, and he eventually sold the tavern. (http://www.eapoe.org/people/snodgrje.htm)

Dr. Patricia Dockman Anderson specializes in U.S and Maryland History, Nineteenth Century; Social and Cultural History; Catholic History; and Civil War Civilians. She has served as a member of the History Advisory Council for the Women’s Industrial Exchange, the Baltimore History Writers Group, and the Maryland War of 1812 Bicentennial Commission. Dr. Anderson is the Director of Publications and Library Services for the Maryland Historical Society, editor of the Maryland Historical Magazine, and a professor at Towson University.