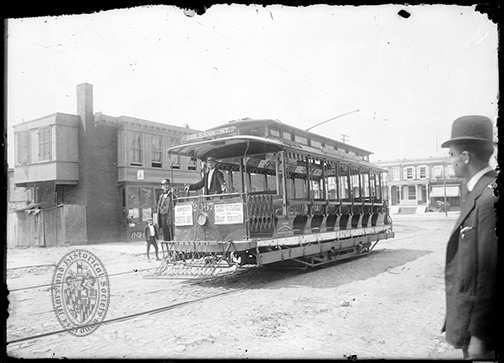 There was a time when you could take a trolley from Liberty Heights Avenue or Roland Avenue down to Stewart’s Department Store on Howard Street or one of the downtown movie theatres on Lexington Avenue. This was the way some children got to school and in a time when not many people could afford a car, the street car system enabled someone who lived in southwest Baltimore to work in Highlandtown or “The Point” (Dundalk). The end of World War II and the migration to the suburbs changed all of that.

In the first half of the nineteenth century the need for an urban transportation system arose as nascent cities experienced unprecedented growth. Horse drawn omnibus lines began to be seen on city streets. These lines ran on steel rails embedded in the streets. The vehicles ran smoother and more rapidly than the older horsecars traveling over unpaved streets. On July 26, 1859, the era of the Baltimore trolley began when a passenger car drawn by four horses traveled from the foot of Broadway to the intersection of Baltimore Street and North Avenue. The fare that day was $.03. When the charter for these trolleys was granted by City Hall, there was a provision that required trolley operators to contribute $.01 to the city for every fare collected. This money was to be used for the maintenance of the city’s parks.(1)

By 1890 there were 178 cars and 1,283 horses in service. In 1899, the United Railways and Electric Company raised the fare to $.05, and instituted a system of transfers that allowed passengers unlimited “transfers” from one line to another to get to their destination. However trips to outlying areas such as Towson, Catonsville and Waverly required an additional fare.

Baltimore can lay claim to a number of firsts in the history of the streetcar. On August 10, 1885 the first commercially operated electric streetcar in America began operation in Baltimore. Leo Daft, an engineer from England, converted the Baltimore to Hampden Line from horse-drawn cars to electricity, via his unique third rail system, using the current from that third rail as the power source. This first line ran from 25th and Howard Streets through Huntingdon and Hampden to Roland Avenue and what is now 40th Street.(2) The first nickel fare collected is now at the Smithsonian Institution.

Following Daft’s example, the Baltimore Traction Company built a line running from Druid Hill Park to Patterson Park in 1891 using underground steel cables (similar to the system still operating in San Francisco today). The cables were powered by steam engines in nearby warehouses. This cable system was abandoned in 1899 when the company merged with United Railways and Electric Company (UR&E). A consolidation of disparate trolley companies and the various types of trolleys, tracks and power sources resulted in standardization with UR&E and a large coal burning power plant on Pratt Street where some of the 190 foot tall smokestacks remain at the Power Plant entertainment complex today.

Baltimore was also the site of the first elevated electric streetcar line in the country. In 1895, the Lake Roland Electric Railway Company built a thirty-five foot tall steel structure to bring its cars downtown. At the time there were no other north-south thoroughfares for street car lines so the “El” was built above some existing tracks. In 1950, the El service stopped and the overhead tracks were torn down.(3) In 1938, a new form of transportation arrived in Baltimore – the trackless trolley. The first ones had solid rubber tires and must have been rough riding, especially on a street with pot holes These trackless trolleys, updated with pneumatic tires and comfortable interiors, remained in service until 1959. The cars were first placed in service where the existing tracks needed major repair or replacement and where sparse ridership wouldn’t warrant the expense of repairing or replacing the tracks. In a city where there was segregation in housing, restaurants and more those days, the Baltimore trolley and trackless trolleys were not segregated.

The trolleys and the trackless trolley had extension arms (poles) on the roof that connected to the overhead power lines. Occasionally these poles would slip out of overhead lines and the car would come to a stop. Often this would happen when the trolley rounded a curve too fast. A special vehicle, the Line Truck, was required to place the poles back on the overhead heads and at times to repair the power lines. The Line Truck had a platform that could be raised to allow a worker to fix the problem by extending up and out over the tracks. It could be raised high enough so that the trolley could pass under the platform while repair work was in progress.(4) Track crews were required to take care of the tracks, the track bed and the cross timbers. Similar to train tracks, cross ties supported the rails, and stone ballast under the ties provided a solid base for the ties and rails. 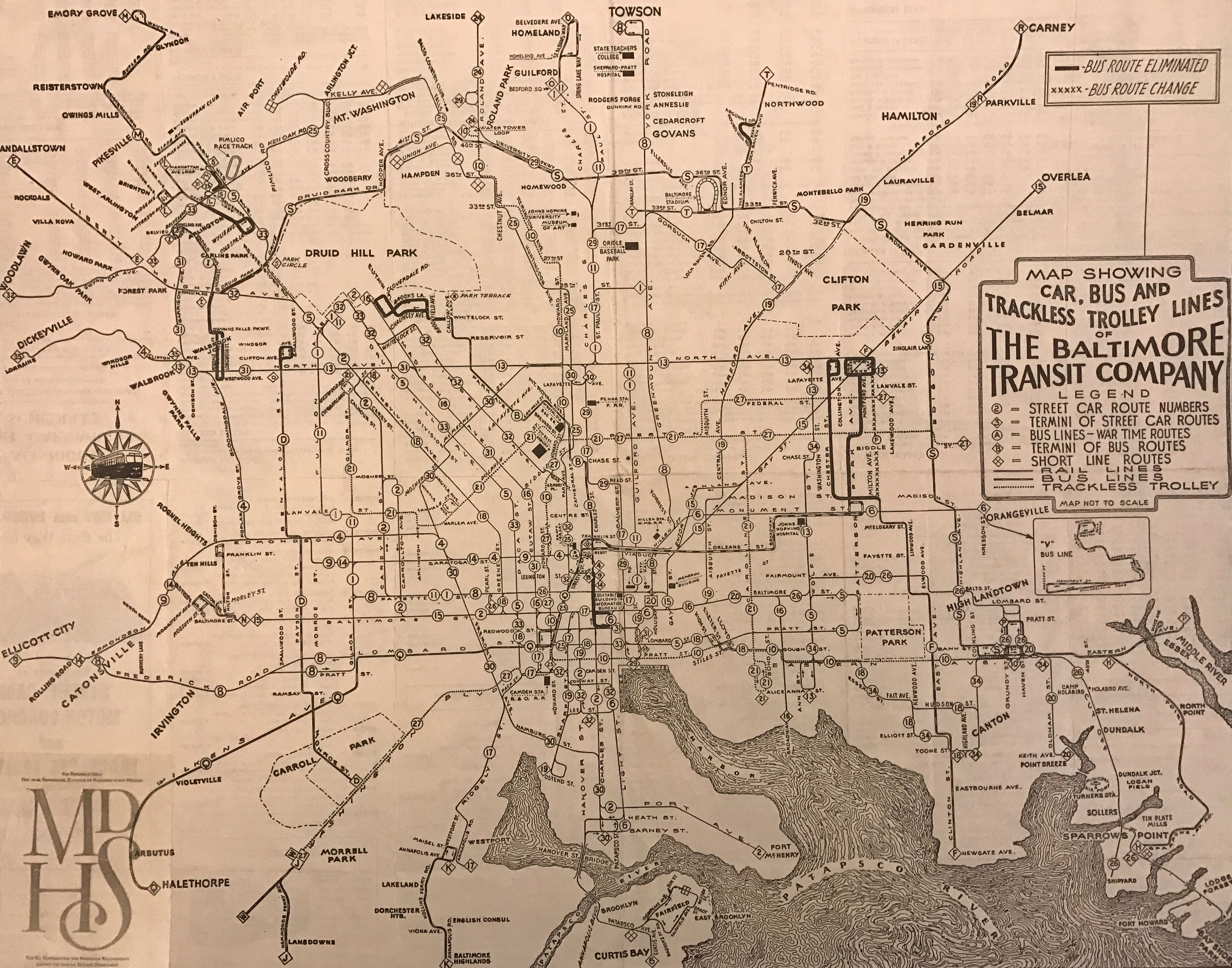 The Companies That Operated the Early Transit Systems

United Railways and Electric Company –This company was formed in 1899 when all of the other Baltimore street car lines merged to form this UREC union.

The Baltimore Traction Company –This company began operation on May 23, 1891 running the Druid Hill Line and the Gilmor Street Line. Their car barn was at Druid Hill Avenue and Retreat Street. Their powerhouse was in a converted Methodist Church on North Gilmor and Mosher Streets. It merged with United Railways and Electric Company in 1899, when the cable car concept died.

The Baltimore Transit Company – A privately owned public transit operator, this company began operation in 1935 providing trolley and bus service until it was purchased by National City Lines in 1948 when its’ trolley service ceased but its’ bus line continued. In 1965 the Baltimore Transit Company fired bus driver Vernon Naimaster, for his involvement with the Ku Klux Klan. The firing went to arbitration with the arbitrator ruling in BTC’s favor. Many other white drivers threatened to quit if this man was not discharged.

In 1899 the Baltimore Streetcar Company built a spur line on Montrose Avenue to the Edmondson Avenue trolleys- the short spur was only 1/3 mile long connected to the Baltimore to Ellicott City line.(Sidney Levy)

Sidney Levy is a volunteer in the Maryland Historical Society’s Special Collection Department.