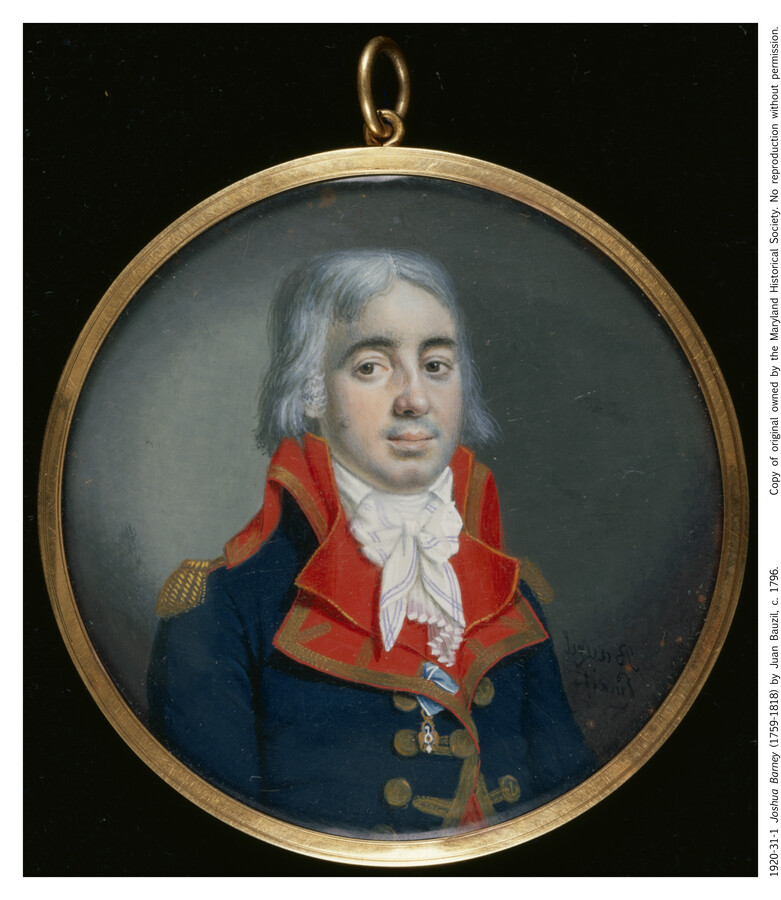 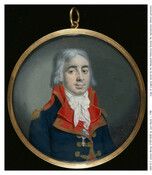 Watercolor on ivory miniature portrait painting of "Commodore Joshua Barney" (1759-1818), ca. 1796, by Juan Bauzil. Barney was born in Baltimore, Province of Maryland. In 1771, he went to sea for the first time aboard a merchant ship. In 1776, he joined the Continental Navy with the rank of master's mate aboard USS "Hornet." Barney also served aboard "Wasp," "Andrew Adoria," "Hyder Ally," and "George Washington." He distinguished himself during the Revolutionary War, captured several British prizes, and was captured and imprisoned several times. In 1792, he left the service of the U.S. Navy, traveled to France, and joined the French Navy as a captain. Barney left the French Navy in 1802 and returned to Baltimore. In 1808, his first wife Anne Bedford Barney (1756-1808) died, who he married in 1780, and left him with several children. The following year, he married Harriet Cole Barney (1787-1849) who bore him three more children. During the War of 1812, he began his service as a privateer in command of the schooner "Rossie." Barney later authored the plan to defend the Chesapeake Bay from the British, was commissioned a captain in the U.S. Navy in 1814, and placed in command of the Chesapeake Bay Flotilla. During the Battle of Bladensburg (1814), he commanded the marines who were charged with the defense of Washington, D.C. from the British invasion force. His detachment engaged in hand-to-hand combat, fought aggressively, and even received direct orders on the battlefield from President James Madison (1751-1836), but were eventually forced to retreat and cede control of the capitol. Barney, wounded in the battle, later died from these wounds in Pittsburgh, Pennsylvania while on a trip to Kentucky in 1818. He is buried in Allegheny Cemetery in Pittsburgh, Pennsylvania.

The donor was the great-great granddaughter of the sitter.