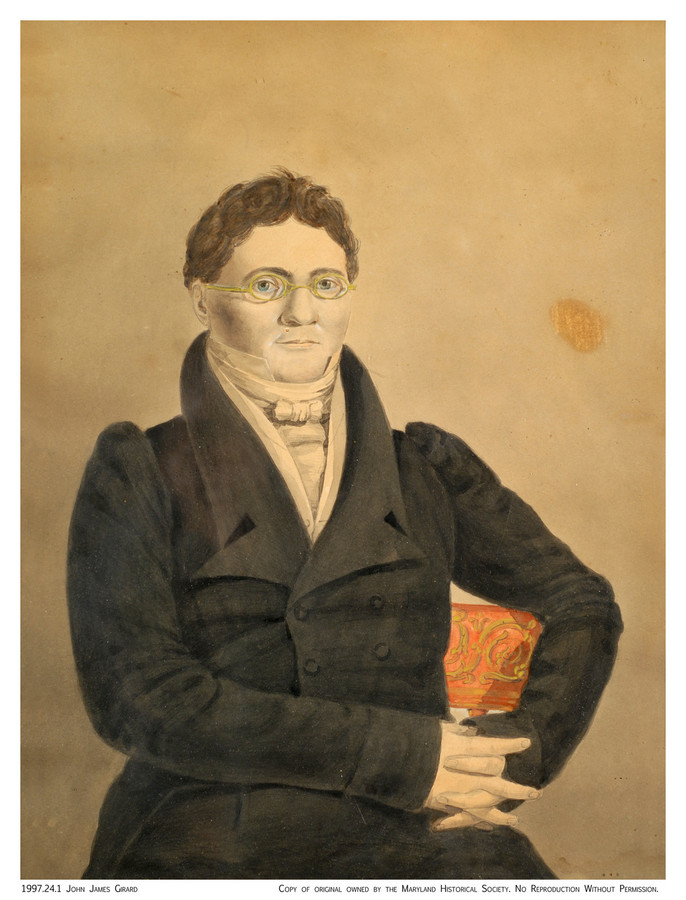 Watercolor portrait features Dr. John James Giraud (1759-1839) in a black suit coat, high collar, and round gold-rimmed glasses. He sits on a Baltimore red and gold painted side chair, a popular design of the post-War of 1812 period. Born in France, Giraud was trained as a physician at an unknown school, he immigrated to Baltimore in January 1795 and was naturalized in 1798. Working in Fell's Point, directories regularly list him as a physician and apothecary. In 1797, he published "Doctor Giraud's Specific and Universal Salt: for the venereal disease, and all the venereal affections which are the result of it." In 1800, Dr. Giraud developed a successful and noteworthy treatment for Yellow Fever, which was spreading in the city. So successful were his treatments that stories were published in newspapers around the United States and his methods were tried and tested internationally, in places such as Havana, Cuba. On March 26, 1806, he was formally commended for his Yellow Fever successes in a ceremony presided over by Baltimore Mayor Thorowgood Smith. Besides Yellow Fever treatments, newspapers advertise "Giraud's Vermifuge," a supposedly successful treatment for "worms" available at his shop. In addition to his success in medicine, he filed 43 patents from 1804-1836, including several related to a water wheel and a steam propulsion apparatus. At the end of his career, he published a biography "Memoir, on the Discovery of a Specific Medicine, for the Cure and Prevention of the Yellow Fever, Plague, Malignant and Pestilential Fevers" (1825). His wife was Ann Harriet Wheeler Giraud, his only child, Dr. Augustus J.T. Giraud (c. 1806-1880) also went on to have a career in medicine, and the elder Dr. Giraud was recorded as owning at least four slaves in 1830.